Why Was the Amish Girl Disfellowshipped? 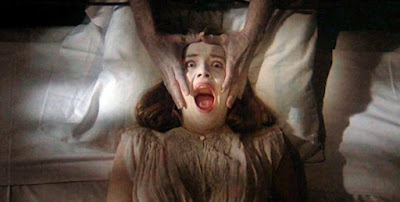 There are three great horror directors whose last names starts with “C”: John Carpenter, David Cronenberg, and Wes Craven. Of the three, Carpenter, thanks to Halloween and The Thing, has the highest points on his filmography. Cronenberg, by virtue of his filmography, is almost certainly the most consistent, and also has the added gravitas of expanding his filmography away from the horror genre. But it’s Craven who will always be my favorite of the three. Perhaps no one has created more iconic horror films and series than Craven, who is responsible for The Last House on the Left, The Hills Have Eyes, The Serpent and the Rainbow, and of course both the Nightmare on Elm Street and Scream franchises. Fun fact—Craven graduated from the ultra-conservative religious college in the town where I grew up.

Deadly Blessing is one of Craven’s sequel-less films, and, honestly, that’s probably a good thing. There’s some interesting possibilities here, but not really anything that’s worthy of a sequel. This is still pretty early in his career, so the fact that there are things only partially set up and not fully developed is perhaps expected. Deadly Blessing has some really good ideas without really managing to get many of them to pay off.

We’re going to start with the marital bliss of Martha (Maren Jensen) and Jim Schmidt (Douglas Barr), but this isn’t going to last long. We learn that Jim is an apostate from an Amish-like cult called the Hittites, the name and idea of which naturally came from Craven’s religious background. The Hittites are described at one point as making the Amish look like swingers. Specifically, Jim has left the Hittites to marry Martha, outside of his faith. But, as I say, the marital bliss won’t last long here as Jim is killed in the barn by his tractor. This is written off as a mechanical accident, but we, who saw it happen know better.

Jim will not be the only victim. We’re going to be introduced to a few of the Hittites. The three that are going to matter the most to us are Jim’s father Isaiah (Ernest Borgnine), Jim’s brother John (Jeff East), and William Gluntz (Michael Berryman), who is both filled with religious fervor and is equally entranced and mesmerized by the tempting people outside of the faith. William is going to wind up stabbed far too early in the film for me, since every film like this one needs more Michael Berryman.

Anyway, there are going to be some spooky happenings around the farmhouse, and there are a lot of accusations thrown around. Specifically, the Hittites like to stamp around about “the incubus” as being a source and bringer of evil. We’re led to believe that this incubus might be Martha. It might also be Faith (Lisa Hartman) and her mother Louisa (Lois Nettleton) who looks so disturbingly like Reba McEntire that it’s kind of weird that she’s not Reba McEntire. Things get complicated when Martha’s friends Vicky (Susan Bruckner) and Lana (Sharon Stone in her first role as a character with a real name) show up, especially because there is some clear attraction between Vicky and John, who is very much still a part of the Hittite community.

There’s a lot going on here, and not all of it pays off in the end, sadly. Craven has so many ideas that he wants to pack into this movie, and at this stage in his career, he didn’t have the restraint to leave a few out for the next film. He wants there to be a strong religious angle to this film, which is the reason for the Hittites here, as well as the Omen-like music that pops up multiple times. He wants there to be a strong supernatural element to the film as well, and while there are moments when (for instance) Lana seems to have dreams that are influenced by something from the outside, this happens so little and with so little strength that it almost seems like an afterthought. And because of this, the ending really doesn’t work.

There are some things to like here. Ernest Borgnine is, bluntly too damn good for this. He comes at this role with a wonderful intensity that evokes the same kind of feeling as Isaac in The Children of the Corn. The same is true of Michael Berryman, who is often a far better actor than the underfunded genre fare he often appears in. It’s also really fun to see Sharon Stone before she was doing guest spots on Remington Steele and T.J. Hooker and picking up roles in Police Academy 4: Citizens on Patrol.

Deadly Blessing really needed to be two movies. Mashing this much possibility into a single plot was too much, and so it really doesn’t work as well as it should.

Oh, the answer to the joke? Too Mennonite.

Why to watch Deadly Blessing: Sharon Stone’s first role with as an actual named character.
Why not to watch: Wes Craven has done so much better.