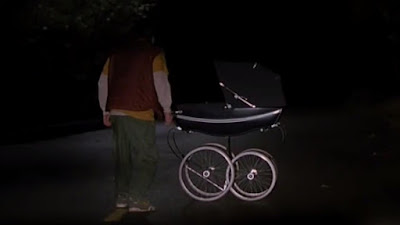 I’m going to spoil Dead End because it’s a movie that desperately needs to be spoiled. It’s a film that desperately wants to be edgy and original and it really, really isn’t. In fact, it goes somewhere that you’ve certainly been before in a movie like this. There aren’t a lot of surprises in Dead End. As a movie, it’s really not that interesting. It purports itself to be at least kind of a gore film, but there’s really only one gore moment in it. It wants to be a horror movie desperately, but aside from an attempt to go somewhere kind of dark, it’s really just some jump scares. But where it succeeds is in giving us a really believable family.

On Christmas Eve, the Harrington family is driving down a highway toward a family gathering. Driving is father Frank (Ray Wise). Sitting shotgun is his wife Laura (Lin Shaye). In the back seat are older daughter Marion (Alexandra Holden), younger brother Richard (Mick Cain), and Marion’s boyfriend Brad Miller (William Rosenfeld). Frank has taken a different path and dozes off at the wheel. Everyone is jerked away after a near accident. There’s some initial strife between everyone as Frank’s shortcut has taken them down a road none of them know. Figured out the ending yet?

Frank, while driving, sees a vision of a woman in white (Amber Smith), who suddenly appears next to their stopped car. She looks injured, so Marion gets out to walk while the car, with the woman, who is holding a baby, returns to a small cabin they passed on the road. And, of course, there’s no one in the cabin and no phone. And no one has cell service. And while Richard goes off in the forest to jerk one out (yes, really) and Frank and Laura explore the tiny cabin and Marion walks back to the cabin, Brad discovers that the woman’s baby is dead. A scream, and suddenly a hearse passes Marion on the road. She sees Brad screaming in the back. Shortly thereafter, the family finds Brad’s mangled body on the road.

Look, you know where this is going. The hearse shows up time and time again, as does the woman in white. And family members vanish in the back of the hearse and then wind up mangled on the road. It’s really just a question of who is next.

What makes Dead End worth seeing is specifically the dynamics of the family. Richard, for instance, is exactly the asshole you think he is for most of the film until he has a vulnerable moment. But Richard is very much the guy who, when there’s a dead person or two around, an endless road with no exits or other traffic, and his sister in a sort of catatonic trance who will pretend to be attacked or will go wander off in the woods just for the hell of it. He’s a terrible person and probably on the edge of believability, but he does have that moment of real vulnerability, which keeps him interesting.

The whole family has relationships that are believable. They bicker with each other, and it feels like bickering that has a lot of history behind it. They fall apart and attack each other and immediately make up and back each other up. This is a family that feels real, even if the situation doesn’t feel real, and in fact feels very predictable. It’s also very interesting when people start sliding off into madness. There are also some really nice shots of the car driving down this deserted road in the dark, absolutely hemmed in by trees. It's the most disturbing part of the movie, and I mean that in a good way.

So how does this end? You already have figured this out, of course, but I’ll tell you just in case. It’s the exact same ending that was used for Carnival of Souls and Jacob’s Ladder. The car accident wasn’t a near miss. Lah-di-fuckin’-dah.

So, really, this isn’t a great movie and nothing that happens in it is very surprising, but the family relationships are well done and worth seeing.

Why to watch Dead End: Family dynamics.
Why not to watch: You’ve seen this before.