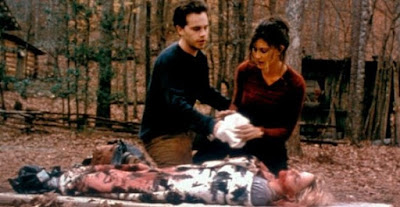 I don’t swing the word “hate” around that often, but I hate Eli Roth. Of all of the films I have seen and all of the various directors whose work I have dealt with, none have made me want to punch someone more than Eli Roth. I’m constantly and consistently disappointed in Rob Zombie, Tarantino’s self-indulgence bothers me, and Zack Snyder doesn’t deserve what reputation he seems to have earned, but none of them make me go into full-on punching mode like Eli Roth. I’ve put off watching Cabin Fever for as long as I felt I legitimately could. I just wanted it in the rearview mirror. So here we are.

This is going to end up being a short review, because Cabin Fever doesn’t deserve more than that, and neither does Eli Roth. This is the story of five people who, despite the fact that two of them are women, are the most frat brother assholes you have ever encountered. They all go to a (sigh) cabin in the woods for a week-long getaway where they all contract a horrible flesh-rotting disease and die terribly. The end.

I would love to tell you there’s more to it than that, but there genuinely isn’t. The characters in this movie are the worst people I’ve encountered in a film in a long, long time. They aren’t actively evil or murderous; they’re just awful human beings, the kind of people that come to mind when you think of “privilege.” They’re smug, stupid, and the kind of people who seem to think that the rest of the world exists specifically for their benefit. And, everyone else they encounter with one or two exceptions, is exactly the same in that respect.

So let’s talk a couple of specifics. Our group of five is made of up three men and two women who have a distinct paucity of redeemable character traits. We can start with Jeff (Joey Kern), who abandons everyone else, including his girlfriend, when he discovers that there is a terrible flesh-melting disease in the area. His girlfriend is Marcy (Cerina Vincent), who is more than happy to jump into bed with Paul (Rider Strong) when Jeff runs off. As for Paul, he’s interested in Karen (Jordan Ladd), but doesn’t hesitate to have sex with Marcy once Karen is fully infected—something he discovers while trying to have sex with her. And then there is Bert (James DeBello), who is the frattiest of frat brothers, unable to take anything seriously until it’s clear that he’s about to die. Most of the trouble comes from Bert, by the way, who can’t stop doing things like accidentally shooting people.

I hate every one of these characters. I hate all of the people they interact with. I hate the fact that they throw words like “gay” and “retarded” around like they don’t matter. I hate that when Paul confronts a cop who he’s interacted with before (Giuseppe Andrews), the cop’s main concern is that Paul has broken up the underage drinking party rather than the fact that he intentionally infects a couple of the kids. This doesn't even touch the completely unnecessary N-word drop early in the film, Roth's attempt to be "edgy" and "dangerous."

So, anyway, I don’t care about these characters. I don’t care about their flesh-eating bacteria disease. I have absolutely no emotional response to them dying, and legitimately, neither do they. None of them have any response to anyone else’s death other than elation that they aren’t the ones who died. This is actually as morally repellent as Roth’s Hostel, and that’s really saying something.

You know what I liked about this movie? It ended. And even that tried to cop an ending off Romero's Night of the Living Dead. Cabin Fever doesn't belong in the same sentence as Romero's film, and Roth doesn't have the talent to kiss Romero's ass.

Why to watch Cabin Fever: You have 90 minutes you don’t want back?
Why not to watch: Because Eli Roth is a terrible human being.