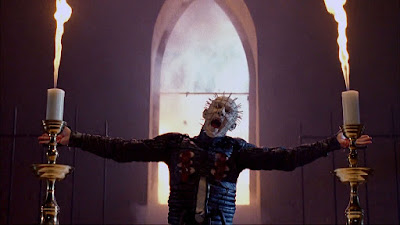 There are ten movies in the Hellraiser franchise. Arguably, that’s about eight too many. Hellraiser III: Hell on Earth is the third in the franchise and probably the first one that didn’t need to be made. There are certainly plenty of places that the Hellraiser film series could have gone. A trashy nightclub and a collection of very disappointing Cenobites wasn’t the right choice.

At the end of the previous movie, main Cenobite bad guy Pinhead (Doug Bradley) was split into two beings—Pinhead, which represents all of the evil impulses and cruelty of the Cenobites and his former human identity, Elliot Spencer. Spencer is trapped in a sort of Limbo while this new version of Pinhead, completely devoid of any humanity, is trapped in a warped statue called the Pillar of Souls.

J.P. Monroe (Kevin Bernhardt), a man with tastes along the lines of Pinhead himself, purchases the Pillar of Souls, which matches the aesthetic of his nightclub, The Boiler Room. Shortly thereafter, cub reporter Joey Summerskill (Terry Farrell) sees a young man literally torn apart by chains in a hospital emergency room. She tracks down Terri (Paula Marshall) who was seen with the young man, and eventually tracks down the club in question. Meanwhile, J.P. has an encounter with Pinhead, who promises him carnal pleasures and delights if he brings him sacrifices, which will naturally empower him to break free of his prison.

So, there are a couple of threads running parallel through Hellraiser III that will eventually come flying together. The first, of course, is Pinhead breaking out of his prison. The second is Joey dealing with the death of her father in Viet Nam. Her dreams tend to be about this, but she also starts seeing Pinhead’s human half—Elliot—in those dreams. He tells her about the puzzle box (which she conveniently got from Terri) and how he needs to be re-fused with Pinhead to prevent him from creating, well, Hell on Earth.

Naturally, Pinhead is eventually going to break free and he’s going to cause a lot of chaos. Joey, being in possession of the box (or the Lament Configuration, if you prefer) is going to be the target of this. To help him, Pinhead is going to give us a new set of Cenobites made from members of the club he destroys as well as a few people Joey knows. These five new Cenobites are, undoubtedly, the most disappointing aspect of this film. Seriously—one of them has a cocktail shaker filled with gasoline and fire breath he uses to blow things up. The original Cenobites didn’t walk around with weapons killing things indiscriminately—they were scary because they were evidence of being horribly tortured and having that turned outward. These new Cenobites (the one who throws sharpened CDs is particularly comic) are just embarrassing.

A lot of this can be forgiven, though, for a single moment in the film. Desperate and on the run from Pinhead and the new (sigh) Cenobites, Joey ducks into a church and begs for help from the priest (Clayton Hill), who doesn’t believe in the physical manifestation of demons…until Pinhead walks in. What follows is a sort of blasphemous representation of the crucifixion and communion. It’s disturbing and transgressive, and it’s what horror movies should be.

But getting there is such a slog. For a horror movie, there’s very little horror (one or two moments) until the moment when Pinhead marches into the club and starts killing everything he sees. Even this has some moments that are far more comic than they are scary. And, sadly, matching with previous films in the series, the special effects are about as unspecial as you’re going to find.

Look, there are giants in the horror world in terms of creators and in terms of creations. Plenty of horror icons had one or two good installations followed by a series of decreasing value until we get to the point of diminishing returns. It happened with Chucky, Freddy Krueger, Jason, Michael Myers, and others. Sometimes, they get resurrected successfully. Sometimes they don’t. Pinhead, for all of his malice, hit that point a lot faster than he should have.

Why to watch Hellraiser III: Hell on Earth: That one moment in the church.
Why not to watch: Dumb Cenobite designs.