Film: The ABCs of Death
Format: Streaming video from Tubi TV on the new internet machine. 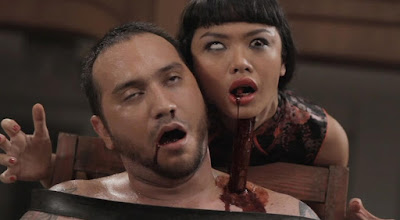 Ah, my old nemesis, the horror anthology. If you had talked to me when I started this blog, I would have told you that the style of film I was most likely to avoid would be a musical. I’ve come to appreciate musicals some, even if they still aren’t my favorite genre. It’s the horror anthology that has become the type of film I dread more than any. I tried to watch The ABCs of Death a couple of years ago and got as far as H before deciding I was done. I don’t know why I tried again, because it really wasn’t worth it.

The conceit here is as straightforward as possible. There are 26 short films made by 26 different directors, each selecting a different letter of the alphabet. For each letter, the director(s) pick a word or phrase and create a very short horror film to represent that letter. That’s it—nothing more involved than that. With a run time of just under two hours without end credits (about 129 minutes with them), we’re not getting a great deal of depth in any of these films. Some are no more than a minute or two long while others range upwards of seven minutes or so. As you might expect, this goes in order from A to Z.

I’m not going to go through all 26 letters; that’s what Wikipedia is for. I do want to make some fairly general observations here, though. Of the 26 films, two of them have overt Nazi imagery, for instance. Four of the films are directly related to toilet imagery for some reason. There’s also a substantial amount of really upsetting sex.

Because the films are so short, most of them have very simple premises and are particularly deep. Horror is actually a decent genre for extremely short fiction (the existence of Two Sentence Horror Stories attests to this), but most of the directors here seemed to want to do something that didn’t really fit the limitations of very short films. There’s an attempt, generally a failed attempt, to do something more artistic than go for something that’s just a good scare, or even something that’s just nasty (although there’s a bit of that, of course).

There are some highpoints. The ABCs of Death starts out pretty strong, in fact. The short films for B (B is for Bigfoot), C (C is for Cycle), and especially D (D is for Dogfight) are really solid entries. They start to go downhill into the realm of needlessly weird with F (F is for Fart, the start of the toilet-related quadrilogy that ends with T is for Toilet). There are a few bright spots in the latter part of the alphabet. L is for Libido, for instance, is a dose of something akin to torture porn. It’s truly disturbing and nasty. X is for XXL is also extremely gory and horrifying, but it’s a really solid little short.

But the bright spots are completely outweighed by the films that are just disgusting for no real purpose (I is for Ingrown), not really horror-related in a clear way (G is for Gravity), or just bizarre for the sake of being bizarre (H is for Hydro-Electric Diffusion, W is for WTF!, and Z is for Zetsumetsu (Extinction) in particular). It’s as if the directors thought they might get extra credit if they made something that the audience might not understand.

The films that take a simple premise and run with it fare better. N is for Nuptials, for instance, has a man proposing to his girlfriend via a talking bird that then begins to confess his infidelity. It’s kind of an old internet joke/meme/story, but it works in a 4-5 minute film. U is for Unearthed is a film that could have stood being longer—it’s at least got an idea of a story, even if it doesn’t really go anywhere. The same is true for V is for Vagitus (The Cry of a Newborn Baby), which manages some actual deep concepts in its short running time. R is for Removed attempts the same and kind of succeeds. Kind of.

But there’s a lot here, some already mentioned above, that just aren’t that good, that interesting, or that funny. High concept is fine. Weird movies are fine. But there has to be a point to them. A woman pursued around the bathroom by her own poop (K is for Klutz) does not an interesting or fun film make. It’s just weird for its own sake, and dull because of it.

Why to watch The ABCs of Death: There are a few high points.
Why not to watch: Most of it is not worth your time.

Posted by SJHoneywell at 6:26 PM

Email ThisBlogThis!Share to TwitterShare to FacebookShare to Pinterest
Labels: comedy, horror, The ABCs of Death