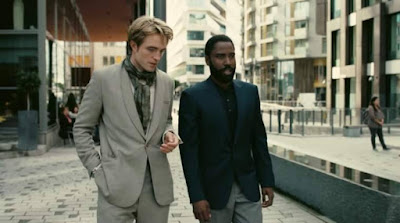 I wanted to like Tenet. I really did want to like it. The truth is that I didn’t hate Tenet, but I also don’t know that I fully understood it. That’s the major problem with this movie; it feels very much like Nolan made this as confusing as possible for the sake of being confusing. I know there were people who found Inception difficult to follow or confusing, but most people seemed to follow it pretty handily. Tenet feels like Nolan was getting paid by how many people he confused.

Tenet is a time travel story after a fashion. It’s not necessarily people going forward or backward in time to different eras. No, this is one of those Gordian knot movies that loops in on itself. People in the film aren’t traveling through time, but moving forward and backward in time, which is called being “inverted.” Knowing this, it will not be a shock to you that we’ll be watching several scenes more than once, one time in the “forward” direction and one inverted. It will also not be a shock that in several cases we will be following the same character both coming and going.

I’m not going to try to explain Tenet. First, I’m not entirely sure I could adequately explain it. Second, and significantly, I’m not convinced that I could fully explain the plot of this movie in less than 1500 words. Like I said above, I think in many ways that it’s complicated to be complicated. I mentioned Inception above for a reason. Nolan got a substantial amount of deserved praise for just about everything about Inception--the look, the plot, and the design of it. Tenet very much feels Nolan trying to one-up himself by out Inception-ing Inception.

I should talk for a minute about the plot, honestly, but I’m not going to try to do it much justice. An unnamed CIA agent who is referred to only as the Protagonist (John David Washington) participates in an extraction at an opera house in Kyiv. During the chaos, he is saved when a masked person “unfires” a bullet through someone attacking him—essentially the bullet comes out of the wall and into the barrel of the gun.

The Protagonist is recruited into a group called Tenet that is dealing with materials that are appearing from the future that appear to be remnants of a terrible future war. Tenet’s job is to try to stop that war from happening. Much of this is going to revolve around a Russian arms dealer named Andrei Sator (Kenneth Branagh). Many of the inverted bullets that the Protagonist has dealt with have come from Sator, who has potentially far more nefarious purposes for what he is doing.

It’s not surprising that Tenet has a stellar cast. In addition to those already mentioned, we get Robert Pattinson as a British agent who ends up working with Tenet, Elizabeth Debicki as the estranged wife of Sator, and single scene from Michael Caine as a British intelligence agent. John David Washington is front and center here, and he’s very good in this. But it also feels very thankless in a lot of ways. Washington is a compelling actor, but Tenet is a very large puzzle box, and Washington’s job is essentially to lead the audience through it and be confused on our behalf.

Tenet is a movie that trades on its own cleverness. It’s a movie that tells you that only smart people are going to understand what is happening, and then makes things opaque and specifically non-scientific to make that more difficult. And, to the film’s discredit, it’s ultimately not that clever. There are so many moments that are supposed to be shock moments that turn out to be incredibly predictable. A fight happens between the Protagonist and someone in a mask. Are you surprised when we get back to that scene and we learn that it’s him in the mask? When someone says they see a person do something, is it a shock when the person who does it turns out to be them? If this was the first time you’d watched a movie that included time travel, I would understand this working—but if you make it through a movie like Timecrimes, Triangle, or even Twelve Monkeys (what is it with time travel movies starting with “T?”), you’ll predict most of the “surprise” moments in this.

Like I said, I wanted to like Tenet, and I didn’t. I didn’t hate it, bt I also can’t think of a good reason to watch it again. Would I understand it better? Probably. Is it worth it? That’s debatable.

Why to watch Tenet: If you’re a Nolan fanboy, you’ve already seen it.
Why not to watch: It’s confusing for the sake of wanting to be clever.