There Were Never Such Devoted Sisters 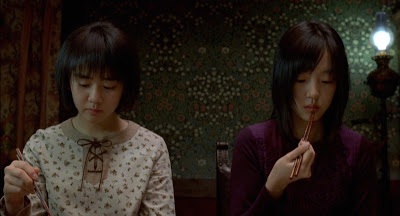 Years ago, a friend of mine was working on her PhD in film. I asked her what she was doing her dissertation on, she told me she was doing a comparison of modern horror movies with traditional fairy tales. It was (and still is) a great idea. In her opinion, the two share the same set of morals. A Tale of Two Sisters (Janghwa, Honglyeon, which evidently translates as “Rose Flower, Red Lotus”) could well be exhibit A. This is apparently based on a traditional Korean folktale modernized very effectively.

I don’t want to go into a lot of detail here. A Tale of Two Sisters is a good enough movie that it should be gone into as cold as possible. The less you know about this, the better. The reason for that is that, even if I am careful, there’s a lot that I can give away here without meaning to. I could, for instance, compare this to a couple of movies that would give a very clear picture of the story, but it would also very clearly ruin the story for someone who had seen those movies. I don’t even want to put them under a spoiler tag for fear of someone catching sight of them. A Tale of Two Sisters deserves that.

So, that said, I’m going to be very careful. Su-mi (Im Soo-jung) returns home after a stint in a mental institution, having been institutionalized for shock and psychosis. She is joined by her sister Su-yeon (Moon Geun-young), who is very reticent. Waiting for her at the secluded estate are their father (Kim Kap-soo) and their stepmother, Eun-joo (Yum Jung-ah). If you think we’re being set up for an evil stepmother tale, you’ve remembered that I said this is based on a folktale, and that is absolutely the case here. Eun-joo seems to have it out for the two girls, especially Su-yeon, who she tortures and physically abuses relentlessly.

And that’s really it. The film is very much about Su-mi and her relationships with the other three people in the house and how she navigates the relationships. There are two reveal moments in the film that essentially drive the narrative. The first of these reveal moments happens at what feels like a point that is far too early in the film—there’s a lot of running time left when we get what seems like the reveal that explains the entire narrative (think “the moment” in The Crying Game, for example). The second big reveal moment happens essentially at the end of the movie, and again changes the entire narrative and refocuses everything that has happened before.

A Tale of Two Sisters doesn’t have the modern conceit of trying to turn fairy tales on their head and doesn’t try to be edgy by making the fairy tale in question “dark” and “gritty.” It’s a dumb conceit, anyway; anyone who has read a few of Grimm’s actual tales realizes just how dark they truly are. Making a dark movie based on a dark tale isn’t somehow a bold or daring choice. No, that’s simply not the case here. While there is plenty of darkness in A Tale of Two Sisters, the goal here isn’t to ramp that up or revel in its darkness. There’s no real gore here or things done for some sort of edginess credibility. It’s merely a modern version of a traditional folktale. Those who know the story will undoubtedly see the first twist coming. I didn’t, but probably should have, since it’s common enough to not be shocking—I’ve seen this twist or a variant on it at least four times.

That’s really all I have to say about the movie itself. It’s worth noting, though, that the DNA from this film can be seen in more modern horror movies. My guess, for instance, is that James Wan is a fan of this film, because it certainly seems like The Conjuring and Insidious are using some of the lessons presented here. A Tale of Two Sisters is about mood and about atmosphere. It’s about putting our main character in a great deal of perceived danger and not being able to really tell what part of that danger is real. After all, she’s just been released from a mental institution at the start of the film. She’s clearly unreliable. Or is she? Was she shuffled off to an institution for other reasons?

This is a film that leaves us unstable as an audience, and that is its greatest strength. Horror directors should take note that violence and viscera aren’t necessary for good horror. Getting deeper into the head of the audience is always preferred.

Why to watch A Tale of Two Sisters: This is how you make the modern version of a fairy tale.
Why not to watch: No good reason. It’s as solid a horror/thriller as you will find.

Posted by SJHoneywell at 9:50 AM