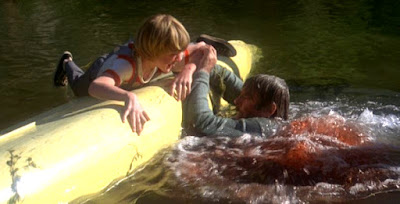 In 1975, Jaws created the summer blockbuster and became one of the greatest real-world horror movies in history. And, naturally, it spawned a lot of low-rent knock off “man vs. nature” variations. Orca was just Jaws with a killer whale; Grizzly was just Jaws on land. There were many of these movies in the years that followed Jaws, but Piranha from 1978 was perhaps inevitable. Piranha is what you get when you want to make Jaws, but you have a very inexperienced Joe Dante as your director.

To put this another way, Piranha is what you get when you take Jaws and remove the vision and attempt to add comedy. Into the mix you stir a couple of B- and C-list movie stars, some of whom deserve better than this film and some who don’t. Toss in some terrible logic, a clear knockoff version of the mayor from Jaws, two very disappointing boob shots, characters who disappear, and one of the weirdest endings I have ever seen. Piranha is a clear attempt to cash in on a better movie, and my guess is that it was at least partially successful.

But here’s the thing--Piranha as a hell of a lot of issues in almost every part of the film. It’s also well over 40 years old, so I’m going to spoil it. There are things in this movie that are completely unexplainable, and I need a place to talk about them. So, consider the rest of this under a spoiler warning.

We’ve got to start with someone getting eaten right away, of course, so we get a pair of backpackers. The two break into what is alleged to be an abandoned military facility and, decide to go for a swim in the facility’s large retention pond…like you do. Secret military bases that have been abandoned naturally have perfectly safe swimming areas. But, of course, this one is filled with toothy fish and our two backpackers are devoured in a series of tiny little bites.

We doodly-doodly-doop to a couple of days later and we meet Maggie (Heather Menzies) who we think initially might be some sort of reporter. She’s not, though; she’s a skip-tracer employed by Earl (Richard Deacon). In this case, her job is to find the backpackers who have gone missing. Off she goes and, despite being a bit absent-minded, actually tracks them to quite close to where they vanished. It’s here that she enlists the support of grumpy local Paul (Bradford Dillman), who takes her up to the military base. The find evidence of the missing kids, and Maggie decides to drain the pool/retention pond to see if they drowned. The pair are attacked by Dr. Robert Hoak (Kevin McCarthy), knock him out, and then drain the pool, which naturally releases the piranha into the local lake. And, of course, there’s a summer camp and a resort not too far down.

On the way, we’re going to learn that all of this is from a government program (naturally) to create something like a biological weapon to use against Vietnam. Now that that war is over, the program is more or less discontinued, but Hoak has stayed on and continued to develop the killer fish.

What happens from this point forward is that Piranha has a lot of ideas it wants to use, but not all of them clearly belong to this movie. There’s actually a really good moment as Maggie and Paul, along with Hoak and a kid they rescue rush to get to the dam before the dam releases some water (and thus some piranha) into the water below. It’s a better sequence because we then discover that there are branches of the river that essentially go around the dam, which means the solution has only been temporary.

But you know you’re going to get the piranha eventually attacking the swimmers downstream. To get there, we’re going to get Barbara Steele as a creepy scientist who insists on calling the killer fish “piranya”; Dick Miller as the head of the newly-opened resort and very clearly the analogue of the mayor in Jaws; and Paul Bartel, immediately recognizable from Eating Raoul and playing almost exactly the same character as the head of the summer camp.

There are some moments here that actually defy expectations. For instance, there’s a moment when Maggie and Paul talk about the piranha in the lake. Barbara Steele’s scientist doesn’t believe them (despite knowing about them in reality) and a hunk of meat is tossed into the water to see what happens. It’s dragged out a few seconds later, and I fully expected it to be unchanged (bad government people not getting evidence, leading to bigger problems). But it’s not, and they immediately agree to start poisoning the lake to kill everything off.

But there is so much here that is unexplained. When Maggie and Paul break into the lab, there’s a stop-motion Claymation creature walking around the lab. Why? No one seems to notice it, but it never comes back in the movie. The resort gets attacked by the piranha, but there are evidently no consequences for the owner, who just kind of walks around looking at dead bodies. The same is true for the summer camp. The piranha themselves have a feeding noise that sounds like very sped-up “nom-nom-nom” noises. Why?

The best moment in the movie comes right at the end. While people are getting medical treatment and bodies are being covered up with sheets, we pan past a television reporter who says, literally, “Terror, horror, death. Film at eleven."

It’s a sad fact, though, that the entire plot could have been solved by putting in a grate that wouldn’t let the fish out if the water was drained.

Why to watch Piranha: 1970s man vs. nature action.
Why not to watch: It’s disturbingly derivative.