Not in Her Right Mind 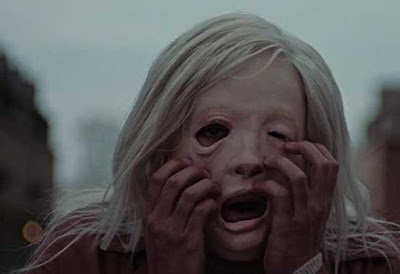 Typically, I write up a movie right after I finish watching it, or at least on the same day. Sometimes, more rarely, I write it up the next day. That’s certainly not the case with Possessor, which I watched last week. I’m not entirely sure why it’s taken me this long to get to writing this film up. I don’t honestly know if I’m feeling a little burned out (highly possible) or just don’t feel like I have a lot to say about this.

Possessor is a science fiction film with clear horror elements. We open with a murder; a young woman (Gabrielle Graham) stabs a man to death for no apparent reason. Despite using the knife, it’s apparent she has a gun. She appears to want to kill herself, but seems unable. It’s eventually a moot point when she is gunned down by the police.

The scene then shifts to something like a high-tech lab. We are introduced to Tasya Vos (Andrea Riseborough), wh was in pretty much every important way responsible for the assassination that we just witnessed. In this high-tech future, Vos is able to insert her consciousness into the brain of another person and control their actions. This technical marvel makes her and her company in high demand—in many cases, assassinations can happen and not only eliminate the rival who is killed, but also the rival who pulls the trigger. These jobs end when Vos has the assassin commit suicide, and she returns to her body.

All of this jumping into people’s bodies takes a significant toll on her life, though. It’s not a surprise that she is somewhat dissociated with her actual life and that she is estranged in some ways from her husband Michael (Rossif Sutherland) and son Ira (Gage Graham-Arbuthnot). She practices conversations with them. Even coming out of the body and mind of her “host” has some trauma associated with it. Once she is back, her boss Girder (Jennifer Jason Leigh) quizzes her on a series of items, some of which belong to her and some that don’t. This short interview is a way to judge how connected Vos still is with her life and own identity.

Even if you don’t know the specifics of where this is going, you certainly have some idea. Another job comes in, and this one is a big one. Vos is set to inhabit the body of the boyfriend (Christopher Abbott) of a young woman whose father is the head of a major corporation. The assassination has been planned to allow the takeover of the company by the man’s son, with significant financial benefits accruing to the Vos’s company, but naturally the hit goes bad. The biggest problem comes from her inability to fully control the body and actions of her host. Her last action is always supposed to be to shoot herself, which will bring her out of the host, but this one resists, and causes a series of additional problems when the host runs from the police after his attempted assassinations.

Possessor could be about a lot of things if you want it to be. It’s the sort of film that seems to have potential meanings in several different directions. I think it’s relatively clear that the film is about something like the dissociation that Vos feels throughout. Nothing seems to connect her to the real world, and she spends a great deal of her time experiencing life as another person. Is that a metaphor for how much time most of us spend on a screen or viewing the world through the lens of other people’s lives on social media? Is Vos’s detachment from her husband and son a symptom of this disconnection, or are they one and the same?

Like most good science fiction, Possessor asks interesting questions and is smart enough to not provide the answers. Director Brandon Cronenberg (son of David Cronenberg) seems happy to follow at least in part in his father’s shoes in exploring some different aspects of body horror. And while there are some minor gore elements here, I find it very interesting that the younger Cronenberg’s foray into body horror is less about terrible things happening to someone’s body and much more about the horrors of inhabiting a strange body or feeling like belonging to no body.

If I have a complaint here, it’s the sex. There’s a decent amount of it, and it’s generally gratuitous. Sure, there are moments that are interesting, like Vos having sex in the body of her host—an idea that’s worth a minute or two of contemplation. But there’s other moments of sex that seem to simply be there because they can be. For me, sex in a movie is not unlike gore in a movie. I don’t object if it’s plot-relevant. Watching a couple of random people we never see again doing the deed simply as a way to establish the voyeuristic nature of the job in question and to suggest that in this future where our minds can be so easily possessed.

Regardless of intent, it feels like at least some of it doesn’t belong here. It’s here for shock value in a lot of respects, and it doesn’t really work. I think it drags down a film that otherwise has some very interesting things to say.

Why to watch Possessor: Solid science fiction with the right dose of horror.
Why not to watch: Moments of completely gratuitous sex that seem to be for shock value and nothing more.