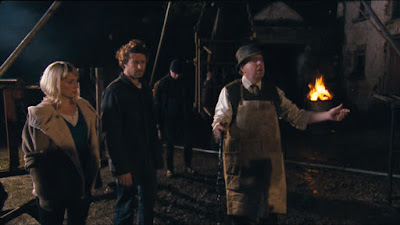 Why are small villages in the British Isles so creepy? There’s a particular sense to them of a deep and disturbing evil over the layer of small-town goodness, I think. Those pious neighbors are actually ready to go all pagan sacrifice at the drop of a hat. It’s spoofed in Hot Fuzz, but there are plenty of British horror movies that have this kind of vibe to them. You don’t have to go further than The Wicker Man for the sense that this evokes, and while it’s not Brit horror, Midsommar has a lot of the same feeling. Wake Wood is essentially a British version of Pet Sematary, and in some ways, it’s a bit more disturbing.

Veterinarian Patrick (Aiden Gillen a year after The Wire and a couple of years before Game of Thrones) and pharmacist Louise Daley (Eva Birthistle) lose their daughter Alice (Ella Connolly) to the attack of a vicious dog in Patrick’s practice. Heartbroken, the pair move to the small village of Wakewood where they each set up shop. We learn eventually that Louise cannot have any more children. One night, their car runs out of gas and Louise witnesses what looks like a disturbing pagan rite performed by Arthur (Timothy Spall), who is essentially the town leader.

Shortly thereafter, while working with a large cow, Patrick witnesses the death of a local man named Mick (Dan Gordon). Wanting his new vet to stay in the area, Arthur confesses to the couple that the people in Wakewood can perform a rite that brings the dead back to life. Those who accept this rite are then bound to the town. The dead person cannot stray from the town, will only come back for three days (enough for a proper goodbye), and must have been dead for less than a year. And, they need a fresh body for the ritual. Mick’s widow Peggy (Ruth McCabe) initially refuses but agrees when Arthur tells her that if she continues to hold out, he won’t bring back Mick for her.

And so they perform the ritual, the same one that Louise witnessed. And Alice comes back, and she’s completely normal. She doesn’t really understand that she’s dead and she doesn’t really understand what has happened to her or where they are. But Peggy, still upset about the use of her husband’s body scares Alice, who tries to run away. Going beyond the border of the town causes the wounds that killed her to reappear; they disappear when she is brought back within the town’s borders. The townsfolk, though, want the Daleys to give up Alice’s last day because something isn’t right.

I mean, of course something isn’t right. There wouldn’t be a movie if something was right. The problem, we learn, is that Alice has been dead for more than a year, which means that she didn’t come back the way she was supposed to, and there is something very dark and terrible moving inside her.

All of this sets up the third act with Alice not so much enacting her revenge (there’s no real revenge for her to enact), but acting in a way to prevent her from being forced to go back to the woods and return to death. This will be accompanied by a few very bloody and terrible deaths. All of this conspires to make the third act of the film both the most disturbing part of the movie as well as the part that falls apart in places. There’s a minor spoiler coming here, so if you don’t want this small moment spoiled, jump to the next paragraph. At one point, when mildly threatened by one of the villagers, Alice, who is a small child, essentially punches into the person’s chest, roots around for a bit, and pulls out their heart. I mean, I realize I’m watching a movie with a reanimated child who was sprung from the corpse of a middle-aged man, but there are some places where even a willing suspension of disbelief won’t take me.

I will say, though, that the ending of Wake Wood is as good as you’re going to find. The implications of what will happen in the minutes and hours after the cameras stop rolling is terrifying in the extreme.

Wake Wood is too good to be as little known as it is. While there are certainly problems in the third act, they aren’t insurmountable ones and they don’t ruin the movie. The best thing Wake Wood does is create a genuine atmosphere not of malice, but of dread, of there being things in the town that are dark and deep and, while not malignant, at least uncaring. That’s much of what makes these pagan cult movies scary. It’s not that the people are always actively evil. The islanders in The Wicker Man aren’t evil. What they are is blindly uncaring. There’s cruelty in nature, so there is cruelty in the religion. Wake Wood is like that. Its horrors are terrible not because they are perverse, but because they are matter-of-fact.

Why to watch Wake Wood: It’s genuinely creepy and heartbreaking.
Why not to watch: Even with the idea of willing suspension of disbelief, some of this doesn’t work.

Posted by SJHoneywell at 7:43 PM