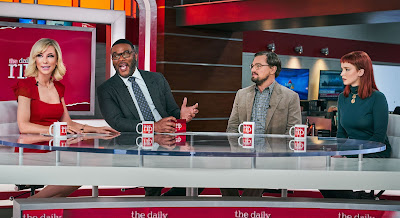 It took me a couple of days to get through Don’t Look Up. Part of that is that I’ve been screamingly busy this week, as per the norm lately. The other part of it is that, frankly, it’s hard to get through. That naturally sounds like a negative, but it’s not in this case. The fact that Don’t Look Up is difficult to get through is one of the strongest points in its favor.

It’s likely that you’ve already heard about this film, so I’m probably going to be a bit summary. We start with the discovery of a new comet by astrophysics Ph.D. candidate Kate Dibiasky (Jennifer Lawrence). She shows the comet to her professor, Dr. Randall Mindy (Leonardo DiCaprio), who calculates the comet’s trajectory. And that trajectory is impact with Earth in about six and a half months.

In fact, Dr. Mindy and Kate can’t get an audience with President Orlean (Meryl Streep), who is clearly a toxic combination of Sarah Palin and Donald Trump. Vain, superficial, stupid, and concerned only with her polls and powers, she is exceeded in her awfulness only by her chief of staff, her son Jason (Jonah Hill), who is a combination of all of the worst traits of Trump’s adult children. Both are apathetic, since midterms are coming and the president is having problems with her Supreme Court nominee. The comet, after all, would not be good for her in the polls.

The pair, aided by Dr. Teddy Oglethorpe (Rob Morgan), get booked on a morning talk show called The Morning Rip, hosted by Jack Bremmer (Tyler Perry) and Brie Evantee (Cate Blanchett). The hosts try to keep things light and fun. They’re not really understanding the existential threat to the planet until Kate essentially loses it and tells them what is actually happening, and naturally, she becomes a meme and is thought of as overreacting while Dr. Mindy suddenly becomes a darling of the media.

This is all the point of Don’t Look Up. The crisis, an extinction-level event, is imminent, and the population of the planet doesn’t care until it becomes something that becomes politically expedient. Even then the effort to destroy the comet is affected by the costs and by the interference of tech billionaire Peter Isherwell (Mark Rylance). And as the film goes on, we learn that a significant portion of the population doesn’t actually believe that the comet exists, leading to a Trumpian MAGA-esque campaign called “Don’t look up” to prevent people from seeing the very visible threat in the sky as the comet approaches Earth.

What makes Don’t Look Up so hard to watch is that it feels like it’s a parody of reality, and it feels that way because it is. The people in the film are so blinded to what is popular or what is new or interesting or will make them money or give them power that they are unable to focus on the fact that the literal destruction of the planet is going to happen. The daytime television hosts joke about Isherwood’s company stock going up while the comet gets closer, somehow not connect to the fact that the comet is bringing with it the destruction of humanity and the entire planet.

And yet, at the same time, Don’t Look Up feels very much like it is accurate when it comes to a variety of topics—the knife’s edge of American democracy, for instance or COVID, or, more tellingly, the impending crisis with the climate. This isn’t allegory that is opaque; it’s right on the surface. The climate is change and the problem is worsening exponentially, and we’re still worried about who might be kicked off “The Bachelorette” and what teams are playing in the Super Bowl. That’s exactly the point—the same kind of crisis is happening right now—multiple crises—and no one cares. And in a lot of cases, no one cares because of politics, because if one side says something is a fact, the other side has to disagree on principle.

I hate that this movie feels so accurate. It’s supposed to be funny. It’s got an unbelievable cast; in addition to the people mentioned above, Timothee Chalamet, Ron Perlman, and Ariana Grande make appearances here as well, along with Michael Chiklis and Robert Joy. But just how close this hits to the reality of what is happening makes it very hard to watch. Don’t get me wrong—it’s damn good and sadly prescient, I fear. It just makes me depressed.

Why to watch Don’t Look Up: It feels both extreme and accurate at the same time.
Why not to watch: It’s surprisingly depressing.