Films: Prophecy
Format: Streaming video from Hulu Plus on Fire! 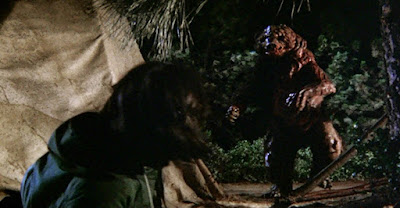 Where do I start with the eco-nonsense that is Prophecy? Not to be confused with the demon-and-angel-soaked The Prophecy of the mid-‘90s, this weird little horror movie from the late ‘70s is all about the ecological disaster waiting in the logging camps of northern Maine. Look, I’m all for environmental responsibility; I’m the Chair of my city’s environmental commission, after all. There is responsible environmental policy, there is legitimate concern over many things, and then there is the ridiculousness that John Frankenheimer foisted on us.

The funny thing is that I’ve seen this before, and there are parts of it I remember really well. I was 11 when this was out in theaters, and for some reason I managed to go see it. It is rated PG, so I guess that covers it. Regardless, while I had forgotten a great deal of it, there’s a scene or two that are just so ridiculous they’ve stayed burned into my brain across more than four decades.

Here's the lowdown: Dr. Robert Verne (Robert Foxworth) takes a job with the EPA to write a report about a dispute between a logging company and a group of Natives (called “Opies” for “original people” in the film). Verne heads up to Maine with his wife Maggie (Talia Shire), who is a concert cellist. She is also pregnant, but knowing that her husband doesn’t want kids, is afraid to tell him. One would think a doctor would know how to not get his wife pregnant, but I digress.

Anyway, the local contingent is standing tall against the logging companies despite, we are told an injunction from the Supreme Court. Not the Supreme Court of Vermont, but The Supreme Court. After a run-in with the loggers, led by logger head honcho Isley (Richard Dysart), local Opie leader John Hawks (Armand Assante) and his wife Ramona (Victoria Racimo) decide to guilt the Vernes into checking out the forest with them, and especially what is happening to the local population.

I won’t play around—it’s pollution, and of course it’s the logging company. Specifically, it’s mercury, which sinks to the bottom of the lake, so it doesn’t show up when the water is tested. Anyway, the “scientific” thrust of the film is that mercury is mutagenic, so the fish eat the mercury, other things eat the fish, and then those things mutate and go loopy. What does this mean? It means that the thing that is going around the woods killing people and causing problems is a giant mutated bear. Imagine a black bear falling into a nuclear reactor, or perhaps the Joker’s chemical bath and you get the idea. Anyway, the bulk of the film is everyone trying to figure out what is happening.

Shakespeare, this ain’t. I do remember, though, a long and thoughtful speech by the good Doctor Verne about how during the course of gestation, an embryo goes through all of the stages of evolution, so a human embryo is (and this is not a direct quote, but it’s close) at one point a fish, and at one point an amphibian, and on and on. He literally says that at one point, a human fetus is feline. And, he continues, that the mercury is a genetic fixative, so it can cause a fetus to stop developing in parts at specific evolutionary waypoints. Why do I remember this? I think even as an 11-year-old watching this I knew it was a bunch of bullshit. We wonder why this country is slipping in science-related fields.

The second thing I remembered is a minor spoiler, so skip the rest of this paragraph if you want to avoid it. There’s a family camping in the woods and the creature attacks them. One of the kids is zipped up in a sleeping bag. He stands up and tries to hop away (which is already comedy gold), when the creature picks him up and bats him into a boulder—he explodes into a shower of goose down from the sleeping bag. It’s one of the most unintentionally funny things I have ever seen. Yes, the video is on YouTube (look up Prophecy 1979 sleeping bag). Thank me later.

This is a dumb movie that desperately wants to be smart. There are a lot of movies that could be made about the environmental crisis that we are facing. There are any number of stories that can present real threats and real concerns about what is happening. This? This is what happens when people who don’t understand science learn the word “mutagen” and get a small special effects budget, all of which goes to the creature and the smaller baby creatures that show up.

This isn’t a good movie, but it is worth a laugh.

Why to watch Prophecy: It’s unintentionally funny
Why not to watch: You’ll lose brain cells.