I Taut I Taw a Puddy Tat

Films: The Cat and the Canary (1927)
Format: Internet video on Fire! 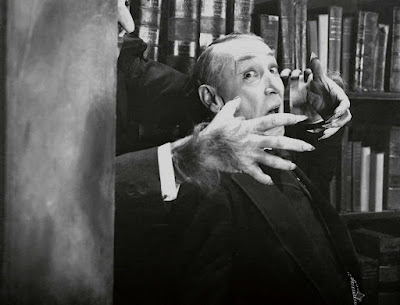 For as much as I purport myself to be a cinematic snob, I can really struggle with silent movies. While silent comedies are often still funny (a guy falling on his ass is a guy falling on his ass, after all), dramas are a lot less accessible. Horror movies tend to fall somewhere between. There’s a lot of possibility for some interesting visuals at the very least. Horror movies are where a lot of the early cinematic language was created. Superimposing one piece of film over another, camera tricks, odd angles, and more came in part from horror movies because there was a need to keep the audience in suspense and fright. That makes a film like 1927’s The Cat and the Canary an interesting one.

This is a haunted house story and a murder mystery as well as a mildly comic film, although not all of the humor really translates to a modern audience. The plot is one that isn’t going to be that shocking. Variations of this have existed for as long as there have been contested wills and continue today in movies like Knives Out. This should give you a solid idea of the direction we’re going and at least the general tenor of the story.

Twenty years before the film takes place, millionaire Cyrus West is dying. His family has descended on him, hoping for the inheritance and driving him insane. They treat him like, as the film might suggest, a canary surrounded by cats. To put them off, he stipulates in his will that nothing is to be done with his fortune for 20 years. Then, 20 years after his death, his will is to be read. And that’s when the movie is going to take place.

Cyrus, convinced that everyone wanted him dead and to take his fortune, has in his will that his sole heir is the person in the family with the same last name, but furthest from him in the family line. This is Annabelle West (Laura La Plante). Most of the family is naturally upset by this, save West’s nephew Paul Jones (Creighton Hale). The will further stipulates that to claim the inheritance, Annabelle must be declared legally sane. If she is not (or dies), the inheritance goes to someone named in a second will.

It doesn’t take a genius of story structure to see where we’re going to go from here. Paul is going to present himself as the one family member who genuinely has Annabelle’s best interests at heart, while the rest of the family seems to be conspiring against Annabelle. After all, if they can make her appear insane, they still have a chance at collecting on the fortune. Thrown into the mix is the report that a maniac called “The Cat” has escaped from an institution. The Cat, we are told, has last been spotted on the grounds of the mansion, and that he believes himself to be an actual cat, tearing his victims apart as if they were, ahem, canaries.

There’s also a subplot about missing diamonds, but let’s not let that get in the way of what is otherwise a game of cat and mouse (or cat and bird, if you will) occurring through the night at a creepy old house. No one really seriously thinks it’s haunted, but there is the threat of a murderous element loose on the grounds and everyone gunning for poor Annabelle, either to kill her or just make her go squirrely. And, what follows is a great deal of what you expect to follow given that basic plot trajectory.

There’s nothing really wrong with The Cat and the Canary. The biggest issue, in fact, is that the 1939 version starring Paulette Goddard and Bob Hope is a lot more accessible than this one. It’s also a lot funnier. Bob Hope was always better when he played someone barely brave enough to put one foot in front of the other, something that he plays against in that version. That said, it’s loaded with solid one-liners and a lot of fun. This one, not so much.

Like I said, it’s not bad. It’s very much a silent movie, though, complete with overacting and overreacting to everything that happens. It’s simply not as accessible as the second version. There is also apparently a version of this from the 1970s that doesn’t live up to either of the first two. Frankly, I’m not invested in the story enough to care about seeing it.

This version of The Cat and the Canary wasn’t bad, but this isn’t a story that needs to be told over and over. The 1939 version is the easiest to follow and also the shortest. If you need to see the story, that’s the one to go with. If you really need a silent version of it, though, this is here for you.

Why to watch The Cat and the Canary (1927): It’s a classic of the haunted house genre.
Why not to watch: The 1939 version is much more accessible.

Email ThisBlogThis!Share to TwitterShare to FacebookShare to Pinterest
Labels: comedy, horror, Paul Leni, The Cat and the Canary