Every Letter Gets Its Own Monster 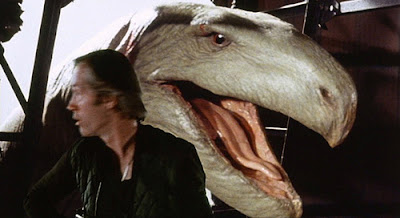 What can I honestly say about Q The Winged Serpent (also known sometimes as just Q)? This very much feels like a movie where someone had a notion that it would be fun to make a movie based on an ancient Aztec deity but had no ability to actually figure out how to make it work. The basic idea of it—a neo Aztec priest commits human sacrifices around New York to cause the rise of a gigantic winged serpent that begins preying on the people of the city—is a lot of fun. The problem is that nothing about this movie actually works in any real way.

As often seems to be the case, we’re going to have multiple plots working at the same time. The first involves the police dealing with a series of weird ritual killings. Detective Shepard (David Carradine) and Sergeant Powell (Richard Roundtree) are baffled by the killings as well as a series of other deaths that seem somehow related even though there is no thread connecting them. We assume they are connected because this is a movie and red herrings like that just don’t happen in movies. They have to be connected. The flayed body found in a room in one part of the city must be connected to the headless window washer.

We’re also going to spend some time with Jimmy Quinn (Michael Moriarty) a small-time crook/getaway driver who desperately wants to be a jazz pianist. Unable to find honest work, he ends up as a part of a diamond heist. When it goes bad, he runs and finds himself in the Chrysler Building where he discovers the nest of a giant creature. This is the titular Q, a massive stop-animated Quetzalcoatl.

So, what we have is a rogue Aztec priest who is killing people to raise the giant flying serpent, which goes around New York at midday, snatching people off rooftops, and its hidey-hole is discovered by a petty crook. Honestly, in skilled hands, this might work.

The problem is that the hands we have are those of Larry Cohen, who can’t get past the basic idea of a massive flying winged lizard living in New York and somehow not being front page news everywhere in the entire world. At one point, trying to figure out how the creature moves undetected in the middle of the day in one of the most heavily-populated cites in the world. At one point, it is postulated that the creature flies in such a way as to be always keep itself between the sun and its prey.

So how does that work? The answer is that it doesn’t. A victim looking into to the sun to the east an not seeing the massive flying lizard attacking isn’t going to explain why someone a mile away looking south isn’t going to see the monster despite it not being in the sun for that person. This thing isn’t the moon where it’s far enough away that we all have the same perspective on in it.

Bet beyond that, there’s a lot else that doesn’t really work here. The police make the jump to the idea of someone resurrecting an ancient god very quickly. Jimmy Quinn is far too forthcoming with damning details about his past, like the fact that he lured two mob types who wanted him dead up to the nest of the creature so that they would be eaten. Why would he spill his guts like this to the police? When the reality of the creature is actually found out, why do people not believe it anyway?

Here’s the thing—the problem with Q the Winged Serpent is that it’s just about 10% off the beam. The idea of keeping it secret doesn’t work—it would be the equivalent of the police in Tokyo wondering how all of those buildings got flattened because Godzilla had a habit of walking with the sun directly behind him so no one could really see him. Make the creature known and everything works a lot better. Well, maybe not everything, but the movie would have a lot fewer plot holes.

I did want this to be good because the idea is just so head-smackingly dumb. Unfortunately, the production (despite some decent stop motion work) and the plot just don’t pass the sniff test.

Why to watch Q The Winged Serpent: With a monster this bizarre, why wouldn't you? Why not to watch: It's powerfully dumb.