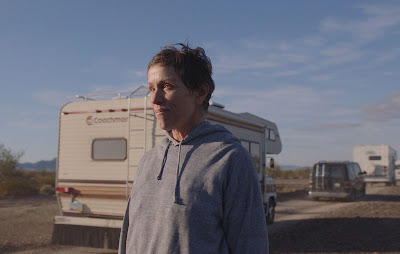 My original plan was to complete the Oscar movies from last year before the end of December, and while I got close, I didn’t quite get there. The original plan involved watching Nomadland, as the winner of three Oscars that I care about including Best Picture, last. But at this point, leaving it to last would genuinely affect the rest of what I’m doing in the next couple of months.

I knew a little about Nomadland going in, but only that Frances McDormand lives out of her van and drives around the country. There honestly didn’t seem like a lot of movie in that, but it is more than just her driving in a van. Nomadland is a film that has a story, but it feels much more like a year-long slice out of someone’s life. There is a sense of conclusion here, but not a complete conclusion. It has an end, but it isn’t “the” end.

The film takes place in 2011. Fern (McDormand) has lost her job at a sheetrock plant in Empire, Nevada. With the loss of the plant, the town dries up. Left with no way to make a living and with no options to sell her home, Fern purchases a van and becomes a nomad. She takes a seasonal job at an Amazon fulfillment center. She meets Linda (Linda May), who tells her about a yearly rendezvous of van-dwellers and nomads headed by Bob Wells (playing himself). Fern learns a great deal about surviving on her own and also makes a few mistakes. She meets Swankie (Charlene Swankie) who gives her guidance. Eventually, Swankie confesses that she is dying of cancer and is hoping for a few last experiences before dying.

The other important relationship Fern develops is with Dave (David Straithairn), another nomad who immediately takes a liking to her. The two encounter each other at Badlands National Park where they both work seasonally. He gets her a job at Wall Drug with him. It is here that Dave’s son arrives to tell him he is about to become a grandfather. Dave decides to leave and to meet his grandchild, inviting Fern to come and visit.

Much of Nomadland is essentially about Fern dealing with loss, and the idea of loss is very much at the heart of the film. We learn eventually that Fern’s husband Bo has died, leaving her alone in Empire, and eventually alone on the road. Much of what happens is essentially Fern learning to adapt to her new situation. There is a great deal of freedom in her new life, but also a great deal of uncertainty. There is also a great deal of pride in Fern—she tells one concerned friend that she is not homeless but merely houseless. When she is forced to get the van repaired, it takes her a long time to admit that she can’t scrap the van because it is her home. This is despite her being fiercely proud that she is mastering this new world and making it on her own.

Of course McDormand is good; she generally is. And while the story is definitely Fern’s story, a lot of it seems to be secondary. Nomadland is very clearly about loss and the idea of loss, and the idea that there is some beauty in that loss. An old idea is that emos see that the world is broken and it makes them sad while goths see the world as broken but find beauty in the brokenness. That’s Nomadland; it is a gothic film in that sense.

There is a deep melancholia that runs through this film. Fern is a character who is caught between wanting to be connected to the people in her life that she finds important but also wanting to be completely free of any and all attachments. She is driven by this desire to be completely autonomous and yet is reined in by connections to other people.

I have to admit, there is a part of me that loves the idea of just…taking off.

The film was adapted by Chloe Zhao, who also directed, produced, and edited it. While McDormand is the heart and soul of it, it is Zhao who is the engine of it, the one who drives it and makes it. It is a piece of film that is a masterclass in mood. There is an ineffability to Nomadland impossible to fully realize in words. It is beautiful and tragic—and beautiful because it is tragic in many ways while still being triumphant. Nomadland is the sort of film that makes me feel very small in the universe, and both terrified of that realization and comforted by the fact that I can be easily ignored. The film is about this feeling and this ability to simply detach from things and the emptiness that follows—an emptiness that is not a hollowness.

Why to watch Nomadland: There is beauty in this.
Why not to watch: There is a palpable melancholia that suffuses it.