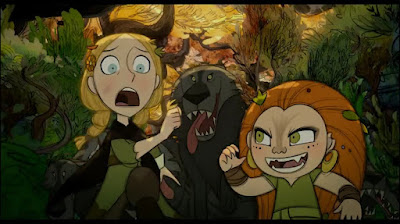 We just got a three-month free trial of AppleTV. I convinced my wife that we should watch Ted Lasso, but I admit to some ulterior motives as well. There are a number of things I want to watch on the service (and I’ll be posting them soon), but I’ve been working on getting her to go for the free trial in no small part because I wanted to watch Wolfwalkers. That seems like a stretch aside from wanting to complete my Oscar list, but even without my Oscars project I would have wanted to watch this movie. Tomm Moore is one of those rare directors where I will actively seek out all of his work until one of us dies.

I’ll talk about the movie in a minute, but I want to talk about the style of Moore’s work because it is this that is so much of the appeal of films like The Secret of Kells, Song of the Sea, and Wolfwalkers. The goal of modern animation seems to be to make things as realistic-looking as possible, to present an animated world that looks at least in some respects like the actual world. Moore doesn’t do that. His worlds are clearly animated, specifically 2-D, and clearly hand-drawn. There’s no attempt to make it look real, but instead to make it look appropriate for the story being told. It probably prevents his work from being taken seriously by a lot of people because it does look retro, or antique, or even amateurish compared with the high-tech animation studios. But it’s the art that sells the fantasy, and Moore always sells the fantasy.

Wolfwalkers feels like a throwback to The Secret of Kells in the sense that we are in a much earlier period, this time around the rise of Cromwell in England. Bill Goodfellowe (Sean Bean) has been sent to Ireland with his daughter Robyn (Honor Kneafsey), essentially to help pacify the land. Goodfellowe is specifically charged with clearing the woods near Kilkenny of wolves. Robyn resists caring for the house or going to the scullery of the Lord Protector (Simon McBurney), instead wishing to help her father on the hunt. Along with her trained falcon Merlyn, Robyn spends her days pretending to hunt wolves instead of cleaning.

It won’t be a surprise that Robyn sneaks out of town despite orders against that and tries to help her father kill the wolves. What happens instead is that she encounters Mebh Og MacTire (Eva Whittaker), who is one of the titular wolfwalkers. Mebh is a girl when awake and a wolf when asleep, not quite a werewolf. Panic and a stampede of sheep causes Robyn to miss her crossbow shot, and she wounds Merlyn instead. Her falcon is dragged into the forest by Mebh. Robyn follows and walks into a trap. Mebh, in her wolf form, frees her, biting her in the process. Robyn also finds that Merlyn is healed. She learns that the wolfwalkers and the wolves are looking for a new place to live—Mebh’s mother Moll (Maria Doyle Kennedy) is in her wolf form and abroad, looking for a new place for the pack to live.

When Robyn tells all of this to her father, he refuses to listen to her. Instead, he is angry that she left the town against his explicit orders and the direct orders of the Lord Protector. But to complicate things, the bite from Mebh has turned Robyn into a wolfwalker, and now, when she sleeps, she becomes a wolf, roaming a town that is actively seeking to kill all of the wolves in the area.

This is a beautiful story, and it’s one that is, admittedly, fairly common with animated movies intended for children. Wolfwalkers is about acceptance. Bill Goodfellowe is so dead-set on following authority and doing what he is commanded to do that he refuses to listen to his daughter, and eventually is put in a position of having to hunt down what his daughter has become. In that respect, this is also an anti-authoritarian movie as well, and I’m going to always give a movie bonus points when it movies in that direction.

What Moore does well with so much of his work is provide us with characters that are interesting to spend time with. Robyn is immediately sympathetic in this film, but it’s Mebh who is the most fun. She is feral and wonderful, and it’s the overall look—the shading on her nose that sells her animal nature as well as the incredible mane of hair—that makes her such a memorable presence on the screen.

In a phrase, Wolfwalkers is everything Brave should have been, and better. It had no chance of winning an Oscar—Moore probably never will, although (along with Laika Studios) he damn well should—but I’m always happy when his work gets the recognition it deserves.

Why to watch Wolfwalkers: Because Tomm Moore’s work is beautiful.
Why not to watch: You’re a sad person who hates things that are good.

Posted by SJHoneywell at 9:20 AM