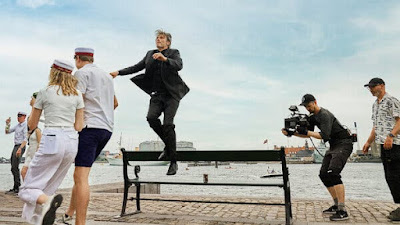 In some ways, looking at Best Picture is easier than the acting awards—I’m just looking at movies that I liked in that case. For Best Actor, there could well be performances that are great in movies that aren’t, which makes this potentially more difficult, but also potentially more interesting. A good example of this is Sope Dirisu in His House. I like the movie quite a bit, but Dirisu (and Wunmi Mosaku) is better than the film itself. LaKeith Stanfield was nominated as a Supporting Actor for Judas and the Black Messiah, but he certainly could have qualified for Best Actor. The fact that Oscar still has some racist tendencies may be what left out Adarsh Gourav in The White Tiger. The biggest miss, though, was easily Mads Mikkelsen in Another Round.

5. I seem to have spent the last three Fridays bagging on Mank and it seems like I’m going to do it again. There’s nothing wrong with Gary Oldman’s performance in this film. It’s just not a performance that, compared with the rest of what was available from 2020, measures up to warranting an Oscar nomination. I challenge anyone to watch Mank and Another Round and then tell me with a straight face that Oldman deserved the nomination more. It’s fine; it’s just not exceptional.

4. The other four nominations are good ones, and I’m not sure I would want to replace another one beyond Gary Oldman. Of the four remaining, I’m probably penalizing Steven Yuen for playing a character I didn’t like that much. The other thing, though, is that I would call Han Ye-ri the real star of the film. She’s the character I want to follow and care about. Yuen’s Jacob may be the focus of the film, but it’s Han’s Monica who is the emotional heart of the film. If I could nominate one of them, it would be her every day and twice on Sunday.

3. The emotional winner of this Oscar as absolutely Chadwick Boseman for Ma Rainey's Black Bottom, and it’s a hell of a performance. While the entire production is excellent, Boseman is the stand-out here. He’s in third place for me for only one reason: I like the other two performances better. I would not have been terribly upset had Boseman won, though. Emotionally, he does feel like he should have gotten this Oscar as someone who was taken far too soon and far too tragically. Boseman’s nomination was warranted, but he was really the sentimental pick more than anything.

2. When Anthony Hopkins won, I think everyone was shocked. Hopkins himself was probably shocked at his win. I can’t say it was undeserved, though, and might well be more deserved than his win for The Silence of the Lambs. Hopkins is as good in this as he has ever been in the entirety of his career. It is one of the most heartbreaking performances of the last 10 years. While Boseman is the winner that everyone wanted and expected, Hopkins might well be the winner that we deserved. I’m not going to take the statue out of his hands.

1. But if I was going to vote for anyone, I would vote for Riz Ahmed in Sound of Metal. This is a wonderful performance, one that seems to come out of nowhere. Ahmed is completely believable. Ahmed’s Ruben is a real person, and one who spends the running time of the film haunted, desperately searching for the thing that has been cruelly taken from him. It’s a very subtly tuned performance, and one that is about as perfect as you’re going to find. He was my pick the moment I saw Sound of Metal, and he still is. 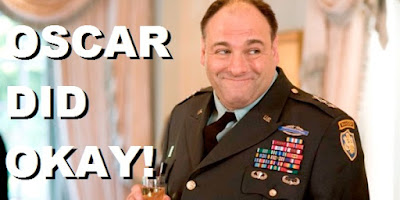 Posted by SJHoneywell at 6:00 PM