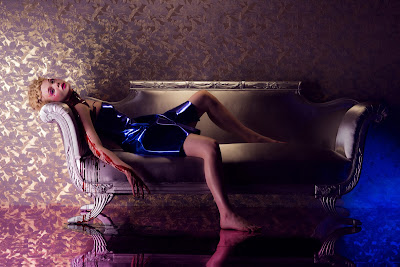 I’ve had The Neon Demon checked out from the library before but I’ve never gotten around to it until now. I’ve heard a good deal about it, though, and I’ve liked at least some of Nicolas Winding Refn’s films in the past. That said, I’m not sure I was prepared for where this goes. What starts as a sort of Day-Glo fashion-based Suspiria ends up touching on some very upsetting topics. It seems cliché to call this film transgressive, and yet that is absolutely the best word for it.

While visually this does have a lot in common with the original Suspiria (and should come with an epilepsy warning), in terms of story, it reminded me a lot more of the underrated and underseen Starry Eyes. That’s not just based on the overall story, but on the way the story works. Both films dip into disturbing ideas through the running time, but take a very hard left into upsetting territory in the third act. And for as disturbing as the conclusion of Starry Eyes turned out to be, The Neon Demon goes further, darker, and harder. Aside from that, the biggest difference is that Starry Eyes is about an upcoming actress while The Neon Demon is about someone who wants to be a model.

Our wannabee model is Jesse (Elle Fanning), who has arrived on the West Coast from Georgia with visions of stardom. She is alone in the world since her parents have died, 16-years-old, and crushingly naïve. In her first shoot, she meets photographer Dean (Karl Glusman) and makeup artist Ruby (Jena Malone). Ruby takes Jesse somewhat under her wing, taking her out to a party and introducing her to Gigi (Bella Heathcote) and Sarah (Abbey Lee). It’s here that we are assured of Jesse’s naivety and of the mean girl tendencies unsuccessfully hiding under the surface of Gigi and Sarah.

What follows is the meteoric rise of Jesse in the world of fashion photography. She is signed to an agency and does a photo shoot with a noted photographer. Shortly after this, she is picked for a runway show, one for which Sarah is quickly and summarily passed over. It’s also here where things start to take a turn for the surreal. I won’t spoil what happens, but will instead say that this starts to feel like everything is five degrees out of pitch from this point forward and it keeps tilting the longer it progresses.

One of the most consistent feelings with The Neon Demon is that off-kilter feeling. It is enhanced by some of the casting, particularly the appearance of Keanu Reeves as a suspect and unpleasant motel manager. Reeves usually plays good guys and specializes in heroic roles (or anti-heroic roles like John Wick). In this, he is very clearly someone morally bankrupt, particularly considering that the film suggests at one point that he engages in extremely inappropriate behavior with a young runaway living in the room next to Jesse. Does this actually happen? It’s hard to say, since Jesse has had several hallucinations and vivid dreams at this point. It’s clear that Reeves’s Hank is a creeper, though, and that’s just one more thing to be unsettling in a movie that is filled with unsettling ideas and images.

With one shocking exception, The Neon Demon is a slow burn up to the brutal third act, but that doesn’t mean that there aren’t a lot of hints of where we might be going. This is an upsetting and disconcerting movie long before we get to the parts of the film that are taboo, to put it mildly.

Is it good? I think it might be. Despite the fact that she is front and center for most of the film, I found Elle Fanning to be kind of a non-entity in this. That’s not a knock on her; I think she’s supposed to be exactly that—a pretty face and not a great deal more. In that respect, it’s a pretty good performance. The same could honestly be said of virtually everyone in the film. While the performances are good, it very much feels like anyone could be genuinely replaced by a mannequin, and again, I think that’s intentional.

No, The Neon Demon is about the style more than anything else. Don’t think that that means there’s no substance here because there is. In fact, in many ways, the style is the substance. Or, paradoxically, the lack of substance is the deeper substance. This is an arresting film to watch, not one I would want as part of a steady diet, but I’m happy I finally got around to it.

Why to watch The Neon Demon: It’s a hell of a vision.
Why not to watch: If you’re not prepared for the third act, it’s going to go places you’re not going to like.