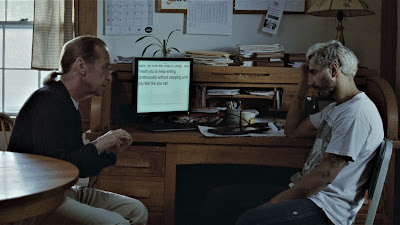 There are certain general things that make for good movies. Sports, at their best, are inherently dramatic, and so make plenty of good movies (plenty of bad ones, too, but that’s not the point). This is also why there are a lot of courtroom dramas—it’s naturally going to create a great deal of drama. Music is hypothetically a lot more interesting, because it has great potential for drama but doesn’t always pan out. This is precisely why there are four versions of A Star is Born of varying quality. And so we come to Sound of Metal, where the drama is going to be baked in from the very beginning.

Ruben (Riz Ahmed) is the drummer half of heavy metal duo Blackgammon. The other half is singer/guitarist Lou (Olivia Cooke), who is also Ruben’s girlfriend. The two travel around the country to gigs in an RV, living what can only be described as a sort of hard rock Bohemian idyll. Their basic needs are met, they have everything they want, and they are touring and performing their music for fans.

There’s no drama unless something happens, though, and what happens is Ruben starts to lose his hearing. This happens rapidly, and when he finally gets it looked at, it is determined that he is hearing less than 30% of what someone says to him accurately. He is advised to stay away from loud noise, but that’s kind of impossible with his job. And so he continues, and his hearing continues to deteriorate until it gets to the point that he can no longer hide the problem. It is a fixable problem, but the cochlear implants that can restore his hearing are tens of thousands of dollars and are not covered by his insurance.

To help him, Ruben goes to a sort of shelter for recovering deaf addicts. While Ruben is four years clean, the sudden change in his fortune puts him at serious risk for using heroin again. The house is run by Joe (Paul Raci), a recovered alcoholic who lost his hearing in Vietnam. Ruben slowly starts to learn sign language and adjust to life as someone with very little hearing. But this is essentially a world where he is forced to be alone—Lou is not welcome there as a hearing person. Eventually, while Ruben is learning to adjust, he starts to think about Lou, and discovers that she is performing on her own in Paris, and potentially reuniting with her estranged father (Mathieu Amalric).

The thrust of the movie comes down to some important decisions that Ruben has to make as well as the reasons for those decisions. If he stays at the shelter, what happens to his relationship with Lou? He could build a life for himself there, but there wouldn’t be much of a life for her, and he may not want a life without her. Second, what about his own career and love of music. For someone whose entire world and skillset was tied up in the creation of music, both production and sound engineering, deafness has to be an unmitigated tragedy. Does he figure out how to scrape together the money for the implants? And if he gets those, what happens to his relationship with the people at the shelter, who are instructed to live their lives as if their deafness is not a problem to be fixed?

As might be expected, Sound of Metal is a movie that turns entirely on the performances. The plot is naturally dramatic and gives us a great place to start, but this is nothing without the intelligent and powerful work of Riz Ahmed, who makes Ruben a real person, and someone who is constantly tinged with a hint of tragedy. Even as he attempts to learn ASL and to adjust, there is a sense of something gone, of something missing, of an emptiness happening behind his smile. It’s not an easy performance to accomplish, and Ahmed is as good as you’re going to find. The same is true of Paul Raci, who was nominated in a supporting role. While much of the tragic driving force of the story comes from Ahmed, it is Raci who acts as the film’s solid, beating heart. It is he who feels like the equivalent of the moral center in a film. Raci is the calm in Ahmed’s storm, the necessary counterpoint to the drummer’s rage at his own condition.

In truth, everyone in this is good. It’s also a film that is smart enough to understand the idea of representation—most of the actors in the film are deaf or hard of hearing, and Raci, playing a deaf character, is a hearing person but was born to deaf parents and learned ASL essentially as his first language.

But, ultimately, what makes this film work is just how personal it is. This is very much a story about loss. Most such stories are about death, and while they can be intensely personal, they are also often very public in the grief that they represent. Sound of Metal is necessarily personal, and all the more effective because of just how much it burrows into the psyche and personality of this one man.

Why to watch Sound of Metal: It earns the ending it gets.
Why not to watch: No clear reason—even if you’re not a metal fan, there’s so little music here that it won’t bother you.