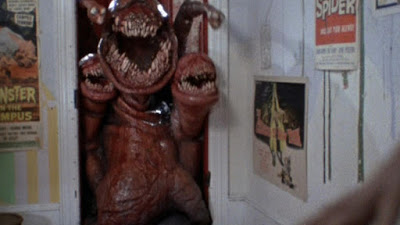 I saw an interview with Sam Raimi once, probably the extras on the Evil Dead II DVD, where he said something about the benefits of working with a very low budget production. Essentially, he said, not having a budget forces you to be creative in a way that having money to throw around doesn’t. If you have thousands to spend on a single shot, you can find a way to spend those thousands. If you have to do it on what’s currently in your wallet, though, you’re going to find a way to make it work. This brings me to The Deadly Spawn, a movie that seems to have found its budget dropped out of somebody’s pocket in a parking lot. This apparently came from the Maya Deren school of, “They spend on lipstick what I spend on my whole film.”

The Deadly Spawn is a monster movie, as the title would indicate. It’s also a sort of alien invasion movie in the sense that the creature in this case arrives on a meteor. A couple of campers investigate a meteor and are quickly devoured by the critters that emerge from the meteor in question. The critters then slither off to the basement of a nearby house. They appear to be big fans of damp, so the fact that it’s raining is going to be a problem. And, of course, the people who own the basement in question are going to have a very interesting story to tell the exterminator.

Except, of course, the two parents get eaten very quickly. This is a pattern that’s going to follow for a bit, actually. And, because pretty much all of The Deadly Spawn takes place in two houses with a bunch of pretty interchangeable people, I’m going to take a few shortcuts with the plot here. More or less, the house where the biggest version of the spawn (they look like Audrey II from Little Shop of Horrors but with a lot more teeth and less personality) also belongs to the sons of the people chomped early on. Pete (Tom DeFranco) is a college student and much younger Charles (Charles George Hildebrandt), who is obsessed with monster movies.

Pete is having a study date with Ellen (Jean Tafler), Frankie (Richard Lee Porter), and eventually Kathy (Karen Tighe), not knowing that extraterrestrial doom lurks in the basement. For his part, Charles heads into the basement to check on an electrician to discover the gnawed-on bodies of said electrician and both of his parents. He figures out pretty quickly that the creatures are eyeless and track prey by sound. This leaves him trapped in the basement for some time, watching what is left of the bodies getting eaten.

Meanwhile, the aunt of the two boys goes to visit a friend for a sort of luncheon, but the spawn attack there as well. Everyone appears to get out (one older woman is quite active in attacking the things with her shoe) and chaos ensues. Eventually, Charles has to figure out a way to get rid of the biggest of the spawn while the people in the area finally realize that something is happening and start hunting the small, tadpole-like larval version of the spawn on their own.

As I said at the top, The Deadly Spawn was made for zero dollars. This is a film that barely had a budget for the film, let alone for anything else. It’s pure grindhouse cinema, from the shoddy quality of the stock to just about everything else. It’s also the sort of movie that is a dead-end for Six Degrees of Bacon. About half of the cast did nothing else IMDb-worthy, and with a single exception, everyone else has six or fewer credits. This is an “I can’t pay you, but I’ll put you in the credits” film, and it shows.

Because of that, it’s kind of charming. There’s a real sense of someone wanting to make something great here and giving it everything they can. Certainly, whatever money they actually had is appearing on the screen, almost entirely in the body of the spawn themselves. While they don’t always look great, there’s a particular charm to them as well.

And, for what it’s worth, The Deadly Spawn doesn’t skimp on the blood. There’s a lot of gore in this—a surprising amount, actually. That does make sense or a film that has this much working against it. At the very least, if you can make the gorehounds happy, you have at least a chance for cult status.

That’s probably the best way to think about this. It’s clearly a cult movie made for a very specific audience. That audience is made up of people who crave blood in their movies and who genuinely don’t care about the niceties of film in general. That audience does not include me in general. This was fine, but ultimately forgettable; I can’t imagine wanting to watch this a second time.

Why to watch The Deadly Spawn: If the box art moves you in that direction, you should watch it.
Why not to watch: There’s a limit on how low a budget should be.