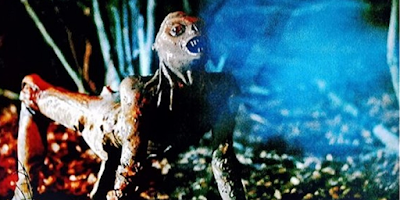 Every now and then, I come across a movie that I have no explanation for. It’s not that the movie is weird (They Live and Bad Taste are weird); it’s that the movie has literally no explanation. Like it was written by two different people, one in the middle of a psilocybin overdose and the other screaming into a tape recorder while in a sensory deprivation tank. Liquid Sky was an experience like this. I know it was a movie and things happened, but I have no idea what actually happened by the end. It’s been a while since I’ve had that experience, but Xtro brought me right back. There’s a story here, but it really feels like pieces of multiple stories inexpertly glued together.

We start with Sam Phillips (Philip Sayer) and his son Tony (Simon Nash) at their farm when, without warning, there is a flash of light and Sam has vanished. Three years later, the light returns. An alien has returned with it. It kills a couple in a car and then impregnates a woman, who soon gives birth to a fully-grown Sam Phillips, who appears none the worse for wear, aside from that rather disturbing birth. Clearly, Sam has undergone a few changes in his three years of alien abduction.

Now that he’s “back” in one form or another, Sam tries to connect with Tony again, as well as his wife, Rachel (Bernice Stegers). As it happens, Rachel has gotten over the missing Sam pretty quickly, since she now has a live-in beau named Joe Daniels (Danny Brainin) as well as an au pair (Maryam d’Abo) to look after Tony while she and Joe are evidently trying to make a half-brother for Tony.

Now comes the fun part. Over Joe’s objections, Sam moves back in. And, since Sam is very clearly an alien from the perspective of the audience, it’s not a shock when he infects Tony with his alien-ness. It’s also not really a shock when Sam decides to eat the eggs that Tony’s pet snake has laid. What doesn’t really make sense is the fact that Tony suddenly starts manifesting what look to be psychic and magical powers. Like, he brings a clown doll (Peter Mandell) to life. When the neighbor kills his pet snake, Tony manages to…make a soldier toy full sized and walk over to her house to kill her. Evidently, making the toy life-sized also gave it live ammo.

But this isn’t the half of the weirdness. Tony is essentially an alien now. We know this because he attacks the au pair and…implants eggs in her? And the living clown toy is apparently completely knowledgeable of how those eggs need to be cared for? And when the au pair’s boyfriend (David Cardy) starts to wonder at his girlfriend’s disappearance…there’s somehow a panther manifested in the house?

In a sense, Xtro is like the first few months of the pandemic. At times, 2020 felt like a story being concocted by an imaginative kid. “…and then school got cancelled! And then there was no toilet paper! And then there were killer hornets from Japan!” Xtro has that feel of the writers feeling like this was their one shot to get everything into this one movie because they weren’t going to get the chance to make another one (and for the record, there are two sequels).

All of that said, there’s a line that runs from movies like Invasion of the Body Snatchers and The Thing to The Faculty, Slither, and beyond that runs directly through Xtro. For as much as this movie doesn’t make a damn bit of sense, there is something familiar about it, like going to an off-brand fast-food restaurant in an unfamiliar city. There’s a sense of normalcy, but just as much a feel of the uncanny valley.

Why to watch Xtro: Because there’s nothing quite like it.
Why not to watch: It makes as much sense as a flavored suppository.