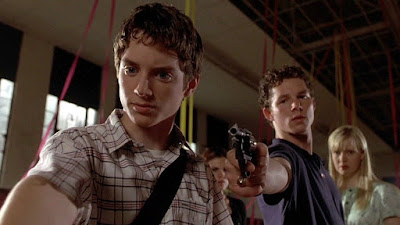 Some tropes are bulletproof enough that they can take a lot of different forms. The basic story behind The Invasion of the Body Snatchers, both the Jack Finney novel and the various incarnations of the movie, are one such trope. The Faculty, produced in the late ‘90s, is one such version. This is very clearly a take on the idea of pod people, and more specifically the idea of aliens coming to Earth and taking over the bodies and minds of the people in a small town with an eye toward grander conquest. In fact, as should be expected, The Faculty explicitly references Finney’s work, albeit incorrectly (but we’ll get to that later).

I’m going to assume that you at least know the broad strokes of the basic story. Alien critters arrive on Earth and, through one means or another, start to take over, control, or otherwise dominate the minds and bodies of the locals. We’re more or less led to suspect that high school football coach Willis (Robert Patrick) is the first victim. He quickly infects fellow teacher Karen Olson (Piper Laurie), and the pair then turn the school principal (Bebe Neuwirth).

Meanwhile, we’re going to need to be introduced to our cast of high schoolers who will be the first, last, and only line of defense against the alien horde. Probably primary among them is Zeke Tyler (Josh Hartnett), a fifth-year senior who is repeating his final year more or less because of his rebelliousness. Just to add to his characterization, Zeke makes money with a designer drug he has created from caffeine pills and other household items. We’re also going to have the odd love quadrangle starting with Casey Connor (Elijah Wood), high school loser and newspaper photographer who is at least mildly attracted to Delilah Profitt (Jordana Brewster), editor of said school paper. Delilah also happens to be the head cheerleader, which means she is dating star quarterback Stan Rosado (Shawn Hatosy), currently thinking about quitting the team. Secretly pining for Stan is Stokely Mitchell (Clea DuVall), who dresses like a goth and claims to be a lesbian to keep people away from her. Added into this mix is transfer student Marybeth Louise Hutchinson (Laura Harris), complete with straight-from-Atlanta accent.

We’re always going to know more than our six students, at least in a lot of cases. We’re aware of exactly what is happening when Willis and Olson turn school nurse Rosa Harper (Salma Hayek) and we’re given more information when Delilah and Casey are almost caught during Harper’s conversion from school nurse to controlled alien creature. Within a day or so, the faculty appears to be overtaken by the creatures (included in that faculty are John Stewart, Famke Jansen, and that-guy extraordinaire Daniel von Bargen), and the student body appears to be converting as well.

The Faculty has some fun with this basic idea, but also a stumble or two. As mentioned above, the film explicitly references Invasion of the Body Snatchers in the character of Stokely, who is familiar with the story. However, (spoiler alert for the book!) she specifically discusses the book and not the movie, and gets the end of the book wrong. Routinely, Invasion of the Body Snatchers goes with a downbeat ending, while the book does the opposite. Someone generally familiar with the book would know this.

To discuss these last few points, I really do need a formal spoiler tag, though.

Naturally, the kids save the day. This isn’t going to have that downbeat ending, which might well be a good thing. Regardless, they all get a happy ending, with the exception of one person who didn’t really deserve one. But once the world is saved…Stokely is suddenly not a goth anymore? Zeke is now on the football team, and is somehow managing to sneak a cigarette into practice? I mean, I like the fact that none of the kids actually get killed—it’s possibly a first for this kind of movie—but their conclusions don’t make a great deal of sense.

And remember what I said about physical changes? At one point, the Famke Jansen character is literally decapitated, but she appears to be fine at the end of the film. So, either there are some big old plot holes, or the ending is a lot more downbeat than anyone thinks.

The Faculty tries really hard. It wants to be a good movie and a scary movie, and it’s not quite either of those things. I don’t really buy a high school kid making his own designer drug that just happens to be what kills off the aliens. There are too many coincidences like this running through it. But it tries, and I appreciate the fact that it does.

But why does Usher appear on the DVD case? He’s barely in this thing?

Why to watch The Faculty: A fun take on the Body Snatchers base story.
Why not to watch: There are a lot of issues with the way this works.

Posted by SJHoneywell at 6:52 PM