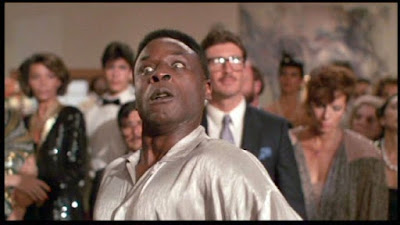 One of the problems that can crop up in horror movies is that minority cultures, or at least non-dominant cultures, can be shown in less than favorable lights. They can, for instance, be shown as savages, either noble or otherwise—as sort of “wannabee Westerners” who are still culturally children. It’s easy to show other cultures as backward, or as somehow evil because they aren’t normalized. That’s the significant problem with The Believers, a film that is otherwise a really sold horror/thriller with a great cast.

Be warned—that’s the drum I’m going to be beating here, because there are films that demonstrate that minority cultures and “exotic” cultures can be shown in films in much fairer and more nuanced ways. The Serpent and the Rainbow, for instance, uses Voodoo as the foil, but the majority of the characters who are a part of that culture are either neutral on the good/evil dynamic or are actively positive characters. Something as old as I Walked with a Zombie shows Caribbean culture/Voodoo practices as just as valid as anything more culturally American. Even something as odd as True Stories sees less-practiced religions as meaningful and deserving of respect. The Believers, admittedly based on a book that may have this same problem, fails in this aspect.

The movie starts rather cruelly. Psychologist Cal Jamison (Martin Sheen) and his son Chris (Harley Cross) watch their wife and mother respectively killed in a freak accident. This causes the two to move to New York for a change of pace. Cal gets a job with the NYPD as a sort of “shrink on demand” for the department. We really could have started the movie here without watching Cal’s wife electrocuted by a coffee maker. Regardless, we are also introduced to Cal’s new landlord and love interest Jessica (Helen Shaver).

Cal soon finds himself in the middle of a disturbing mystery. A ritualistic murder of a child is discovered, and a cop named Tom Lopez (Jimmy Smits), the man who discovered the body, is more upset than normal at the discovery. Lopez is a practitioner of Santeria, which is more or less a syncretic religion that blends Catholicism and West African faiths. Lopez is concerned for his own life, because someone has stolen is badge, which means that person can have power over him. The culprit, it is supposed, is not a santero, but a practitioner of Brujeria, which is shown as a sort of evil offshoot of Santeria.

The discovery of a second body and the disturbing suicide of Tom Lopez leads Cal further into what happening, guided in part by the efforts of Lieutenant McTaggert (Robert Loggia), who also seems more and more affected by what is happening. Cal also finds his way into a group lead by researcher Oscar Sezine (Raul Davila), connected to a powerful mogul named Robert Calder (Harris Yulin). The mentor of Cal’s late wife and her husband (Elizabeth Wilson and Lee Richardson) also appear to be connected to this group, as do the parents of the two sacrificed children.

You can see where this is going, right? The Believers is a film that is happy to give its audience a lot more information that it gives its characters. We learn of the presence of Palo (Malick Bowens), a powerful Brujeria priest long before Cal or anyone else knows of him. We see him wrapping snakes around Tom Lopez’s badge, and so it’s not a huge surprise when, in Lopez’s autopsy, a snake is revealed in his stomach.

The Believers is a difficult film to judge in a lot of respects. The main problem with it is that virtually everyone who is connected to anything other than bog-standard Catholicism is a practitioner of a religion that is depicted here as being a kissing cousin to what Hollywood depicts as Satanism. These are people who are desperate for worldly power at any cost, clearly up to and including the ritual sacrifice of children. There’s no “Santeria is just another religion” in this film. Anything that isn’t essentially Western belief is not merely marginalized, but is outright evil. Aside from Sezine and Cal’s housekeeper (Carla Pinza), and perhaps Tom Lopez, the entirety of the non-“normal” American religious community might as well have horns and fangs.

And that’s the problem here. The Believers is a really good story, and it’s put together well. It’s what you’d expect from John Schlesinger, and what you’d want from a cast this good (it also includes Richard Masur as Cal’s lawyer). The twists are good ones and not always expected, and the final shot is as good as you’re going to find. It’s just insensitive to a fault, and while that probably wasn’t a huge issue in 1987, it’s a fact that ages this film in an unfortunate way.

Why to watch The Believers: It really is a cool story.
Why not to watch: It’s really culturally offensive.