Tales from the Cryptid 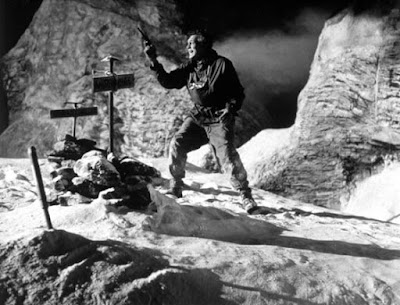 I have a friend who loves cryptids and cryptozoology. Her penchant is much more for Mothman than for anything else, but name a cryptid around her and she’s going to know the lore. The Abominable Snowman (sometimes given the longer and more impressive title of The Abominable Snowman of the Himalayas) is a movie with her in mind. Not only is there the titular cryptid beastie at the center of this, it also features the great Peter Cushing as the sort of gentleman adventurer/scientist that he was born to play.

Dr. John Rollason (Cushing) is a botanist working in the Himalayas along with his wife Helen (Maureen Connell) and their assistant, Peter Fox (Richard Wattis). They are guests of the local lama (Arnold Marle) when a second expedition appears. This expedition is lead by Dr. Tom Friend (Forrest Tucker), who brings with him a trapper named Ed Shelley (Robert Brown), a photographer named McNee (Michael Brill), and a native Sherpa named Kusang (Wolfe Morris). This expedition is geared to find, capture, and bring back a yeti to display to the outside world. Not realizing the full corporate greed of the expedition, John Rollason agrees to join, motivated by a desire to know about the creature. He goes, despite the protests of both Helen and the lama.

Now, since this is a horror movie at its core, you can expect that it’s not going to go according to plan. The Abominable Snowman, while not really concerning itself with gore or even outright scares, does want to concern itself with the behavior of the people in question. It’s very much a morality play, and one that would absolutely fit in the world of today despite it being more than 60 years old. I didn’t expect something that could be easily interpreted as an environmental message in this—and it probably wasn’t intended as such. Based on when this was made, The Abominable Snowman is almost certainly an anti-war film at its heart.

What’s going to happen is that the members of the expedition are going to slowly be, for lack of a better way to say it, picked off. McNee will be injured in an accident of sorts, and then, seemingly hypnotized, wander off to his doom. Kusang, spotting the arm of one of the creatures, feels back to the monastery. Things start to get even worse when Shelley and Friend manage to kill one of the creatures. Still, they want a live one to take back with them and display to the world. Shades of King Kong, as it were, with a smaller, if not so much less deadly prize.

But it’s the last 15-20 minutes of The Abominable Snowman that really sell the story. What the creatures actually are and how they actually behave is not something that this review is going to spoil. Suffice it to say that there is very much a message here about greed, about human hubris, about our desire to control and conquer the world around us, and, ultimately, about what the filmmakers think this will lead to.

I admit I didn’t expect a completely crazy creature feature. I also didn’t expect that a movie called The Abominable Snowman would turn out to be this intellectually deep in places. Oh, I admit it’s a message that is applied with a mallet in places, and is explicitly spelled out a time or two, but it was surprising nonetheless. It’s smart that it keeps the yetis mostly a secret, although it very much could have used more of them. It’s also smart enough to not drag out the ending longer than it needs to. It hits home its final message, makes sure that the audience knows what this whole thing was about, and then gives us the last few credits.

I don’t often say this, but The Abominable Snowman could stand to be remade. The problem with that is that it would be likely that instead of being picked up by someone who could make a thoughtful and respectful remake, it would end up being turned into a big-budget CGI-athon that did end up as a creature feature instead of the more contemplative film this turned out to be. It’s not the yetis who are the bad guys here, but the people. It’s not the yetis that need to be conquered, but human frailty and the environment. It’s unlikely it would be made that way again.

Why to watch The Abominable Snowman: This is surprisingly “woke” for a film of this vintage.
Why not to watch: More yetis needed!