Film: The Trial of the Chicago 7
Format: Streaming video from NetFlix on basement television. 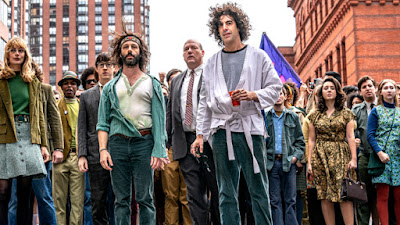 There’s something very special about a really good courtroom drama. It’s absolutely one of the reasons a television show like Law & Order and its multiple variants have lasted as long as it has. Aaron Sorkin writes a good courtroom drama evidenced by A Few Good Men, which ranks near the top for the subgenre. The Trial of the Chicago 7 is only the second film Sorkin has directed, and the first that has gotten a Best Picture nod; he’s two-for-two in getting screenplay nominations for films he’s directed. I went into this expecting it to be very good, mainly because I have a tendency to like Sorkin’s writing.

This is very much a courtroom drama, covering as the title suggests, the trial of seven (and eight for some time) defendants accused of starting a riot in Chicago in 1968 around the Democratic National Convention. We don’t actually get a great deal of the convention; we get a nice introduction to the various players and then we’re straight into the beginning of the trial.

Essentially, The Trial of the Chicago 7 boils down to the same basic event played out endlessly and in multiple variations. Specifically, we’re going to get clear evidence that the defendants are being railroaded while being told that there is no possible way that they are being railroaded or being treated unfairly, especially by Judge Julius Hoffman (Frank Langella). Essentially, the prosecutors, lead by Richard Schultz (Joseph Gordon-Levitt) get anything the want and have all of their objections sustained while the defense, led by William Kunstler (Mark Rylance) and Leonard Weinglass (Ben Shenkman) are given no respect or ability to even challenge a ruling. Through the course of the trial, Kunstler racks up a few dozen contempt charges for merely attempting to defend his clients.

Between days in court, we get some discussion between the defendants, who are both surprised that they are being tried together despite not really knowing each other and being a part of multiple organizations and are unsurprised at the fact that this will make them easier to convict. The seven consist of Tom Hayden (Eddie Redmayne), Abbie Hoffman (Sacha Baron Cohen), Jerry Rubin (Jeremy Strong), Rennie Davis (Alex Sharp), David Dellinger (John Carroll Lynch), John Froines (Danny Flaherty), and Lee Weiner (Noah Robbins). The eight member for at least part of the trial is Bobby Seale (Yahya Abdul-Mateen II). Seale was added in as a defendant despite not being a part of the other groups. He was the head of the Chicago chapter of the Black Panthers, and wasn’t even in the city when the riots happened.

The only way to really describe this movie is “Kafkaesque” in every way that word can be used. It seems a great deal as if Sorkin took his inspiration both from the trial itself and Kafka’s work “The Trial.” The experience of Seale is most indicative of this. Seale wanted to separate his case from the others in large part because his lawyer was laid up in the hospital. Judge Hoffman refused, and demanded that Kunstler take on the case, but Kunstler refused at the request of Seale, who was also told he could not represent himself. Thus, Seale spent months in court without legal representation. Eventually, he was beaten by court officials, chained and gagged, and finally given a mistrial.

This, though, is the story of the film. It is a long, Kafkaesque nightmare, a series of catch-22s that Joseph Heller couldn’t have thought of in his most devious of moods. The seven men on the dock are, essentially, doomed to the fate that Judge Julius Hoffman wants them to have. He has decided their guilt, and spends their time in court manipulating the evidence and what the jury can and cannot see to guarantee the conviction he wants. This includes not allowing testimony from the Attorney General (Michael Keaton) under Lyndon Johnson that would essentially clear all seven defendants.

All of the performances are good. That’s even true of Eddie Redmayne, an actor who has very rarely done anything for me. This is truly an ensemble cast, though, and there are no real leads. Sacha Baron Cohen was nominated for Best Supporting Actor, and I think it’s a fine nomination. In a lot of ways, Cohen’s performance is the one that ties the film together. There are several scenes where he is performing something like stand-up in the evenings after a day spent in court. In many respects, we get a picture of what happened through Abbie Hoffman’s lens.

This is also a very good performance from Frank Langella. I like Langella as a general rule. He plays really terrible people (Dracula, Dave, The Ninth Gate) very well, and in some respects, Judge Julius Hoffman might well be the most despicable. Langella tinges his performance with obvious contempt for the men on trial, and he hits that mark perfectly.

Why to watch The Trial of the Chicago 7: Good courtroom dramas are special.
Why not to watch: Depending on your politics, it will make angry or really angry.