The Night He Came Home...Still 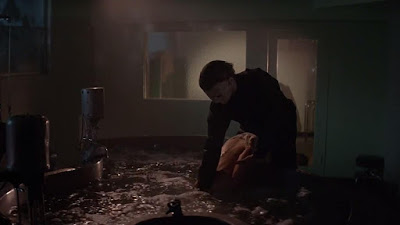 There’s a part of me that is very leery of sequels. This is evidenced by just how many sequels I haven’t seen, even of movies I like a great deal. It’s taken me this long, for instance, to get to the first sequel of Halloween. Halloween II picks up immediately from where the first movie left off. We’re still on that same Halloween night and what we’re going to see is not merely the aftermath of the rampage of Michael Myers, but the continuation of it.

I’m going to assume you remember the details of the first film. If you don’t, that’s on you. The details that are important here are that Laurie Strode (Jamie Lee Curtis) has managed to survive; Dr. Loomis, who treated Michael, has put six bullets into him; and finally Michael, despite being shot multiple times, has vanished.

I’m going to be pretty blunt here: there’s not a great deal of plot in this movie, which is pretty expected. This is what Siskel and Ebert used to call a “dead teenager movie” in a lot of respects, but it’s also a lot better than you might expect for a slasher in general and a sequel in specific. I tend to go into movies like this one expecting to see a series of slasher deaths, wooden acting, and gratuitous nudity, and really, this is a lot better than that.

Rather that go through a blow-by-blow, I’m going to discuss one particular sequence to show what I’m talking about. Laurie, naturally traumatized by everything that has happened, has been taken to the hospital and is under observation. Meanwhile one of the nurses and a paramedic head off to the hydrotherapy room to do the deed in the whirlpool tub. After a few seconds of rather tasteful nudity and a few more of foreplay, we see Michael’s hand turn up the heat in the tub. The nurse (Pamela Susan Shoop) tells her paramedic paramour (Leo Rossi) to see what is happening. All pretty standard slasher set-up, complete with a couple of seconds of nude scene. But this is also where Halloween II demonstrates that it wants to do a little more than just be gory.

We see a lot of what follows from the position of being in front of the nurse with the tub controls behind her. As the nurse sits on the edge of the hot tub, tastefully wrapped in a towel, we see a shadow play behind her of Michael Myers strangling the paramedic. Myers then enters the room. The nurse, back turned, still thinks he is the paramedic. Once she realizes this is not the case, Myers (naturally) kills her in brutal fashion. This sequence has everything the slasher fan really wants—nudity, sex, and two kills, one of which is particularly nasty. It also does so in a way that isn’t merely jump scares and gore. It’s well filmed and paced and tense. We know what’s coming, but the film steadily builds anticipation until it eventually pays off.

As good as sequences like that are, though, Halloween II is never really capable of capturing the brutal magic of the original film—and that’s not unexpected. The original Halloween is not merely a seminal horror movie or slasher film, but one of the truly great films of its decade. This sequel, intelligently and thoughtfully shot as it is, couldn’t possibly match that standard.

But really, that’s okay. Halloween II isn’t intended to be an acting clinic or a highbrow example of prestige filmmaking. This is a dead teenager movie. The characters we have are just going to be people, not really much distinguishable by characteristics or traits. Laurie is scared, but is a survivor. Dr. Loomis is manic, desperate to get Michael back into custody or killed and stopped for good. Michael, for his part, is an implacable killing machine. And again, that’s what we expect. That’s what we’ve paid for. We’re not looking for characterization. Michael stalks through a hospital looking for Laurie and killing doctors and nurses along the way. There’s no reason to really name those doctors and nurses. They’re just there to be knocked off as we work toward the film’s climax.

It’s a cop out to say that if you like slasher movies, you’ll like Halloween II, except that it’s also true. This is better than a sequel would be predicted to be. Fans showing up for the kills will be pleasantly surprised at how good this really is. And, honestly, people who aren’t slasher fans aren’t going to watch this anyway.

As a final note, John Carpenter wanted the Halloween series to become a bunch of non-direct sequels, unrelated films that simply had horror and a Halloween theme in common. This was the genesis of Halloween III: Season of the Witch. That being the case, this ends well to set up the idea of moving forward without Michael Myers in the mix.

Why to watch Halloween II (1981): Picks up right where the original leaves off.
Why not to watch: As expected, the magic of that first film is not here.

Posted by SJHoneywell at 8:16 AM