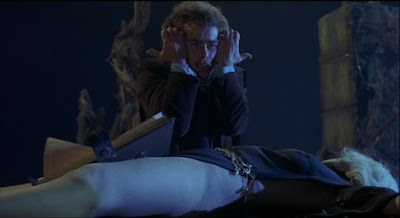 Some authors don’t translate to the screen well. Ray Bradbury, a favorite author of mine, is notoriously difficult to adapt to the screen in large part because no one really talks like his characters talk. Another author is H.P. Lovecraft. When you write stories about creatures that the author tells you are impossible to describe and impossible to exist in the real world, you’ve got something hard to depict. Lovecraft stories and Lovecraft-inspired films are hit and miss. Generally, films that are more Lovecraft-inspired (like Carpenter’s The Thing or Annihilation) are better than direct translations of his work to the screen. Sure, there are some good exceptions--Dagon, The Color Out of Space, and Re-Animator come to mind. Of all of them, The Dunwich Horror might be the most accurate, which is ironic considering how far it deviates from the source material.

The film starts with a woman giving birth, and it’s heavily implied that the birth does not go well. We then jump forward 25 or so years into the future and meet Dr. Henry Armitage (Ed Begley), lecturer at Lovecraft-made Miskatonic University. When the film starts, Armitage has just finished a lecture on local history and has used a rare book called The Necronomicon (just leather bound and not “bound in human skin and written in blood” as Evil Dead fans might expect). As he returns the book to the library with his assistants, a strange man asks to see it.

That strange man turns out to be Wilbur Whateley (Dean Stockwell), descendant of the Whateley clan, notorious practitioners of strange occult rituals. Despite the Necronomicon being priceless, he charms one of Armitage’s assistants, Nancy Wagner (original Gidget Sandra Dee) into giving him a look, and it’s strongly implied that his ability to charm her is supernatural. The two spend some time together and Wilbur misses his bus back to his home down of Dunwich, so Nancy drives him. To further reinforce that Wilbur has ill intent, we see him sabotage her car and drug the tea he gives her. He soon convinces her to spend the weekend.

Much of this centers around the reality of the Old Ones, a race of beings from another dimension that once ruled the Earth. It is soon clear that Wilbur wants to bring the Old Ones back, and that to do so he will need a sacrifice. Clearly, that sacrifice is going to be Nancy, and Dr. Armitage and his other assistant, Elizabeth (Donna Baccala) will need to try to stop him. Also standing in the way is Wilbur’s grandfather (Sam Jaffe), as well as something locked in the upstairs room of the Whateley house.

The Dunwich Horror really does attempt to do right by Lovecraft’s style and story. It doesn’t always live up to the strange visions Lovecraft had, but it gets us about as close as 1970 would allow. It also seems to promise a lot more nudity than it delivers. Reportedly, Sandra Dee took the role specifically to try to change her image, but refused to do the final scene in the nude (which absolutely would have changed her image a great deal).

Much of the intent of The Dunwich Horror is to create an atmosphere that makes the rest of the story work. We get glimpses of a couple of the creatures in the story, but these are brief, and that’s necessary. One of the trademarks of Lovecraftian horror is that the creatures his characters encounter defy description, “non-Euclidean” being the most common adjective applied both to them and to the architecture in which they live. As such, this does a pretty good job of creating that kind of strange feeling that things are off in Dunwich and especially in the Whateley house.

As an author, Lovecraft was problematic in a lot of ways, not the least of which being his rampant racism. Despite this, a lot of his stories are evocative and interesting, and there are a lot of films that are very much inspired by his work. Guillermo del Toro has talked about a big-screen adaptation of At the Mountains of Madness for years, and he does seem like the current director best-suited to Lovecraft’s oeuvre. But for all that, Daniel Haller does a creditable job with this.

This is a rare film that, in my opinion, would be improved with more nudity. Much of what is trying to be established here are the weird cult practices of the Whateley family, and they should be made a lot weirder in that respect. As mentioned, this is very much hinted at, including some frank conversations about sex between Nancy and Wilbur. There’s a sense of this wanting to walk the same path that The Wicker Man would couple of years later, and it really needed to embrace that more than it does.

That said, for what it is, it’s pretty good.

Why to watch The Dunwich Horror: Gets the feel of Lovecraft pretty well.
Why not to watch: It genuinely needs more ritualistic nudity.

Posted by SJHoneywell at 5:18 PM