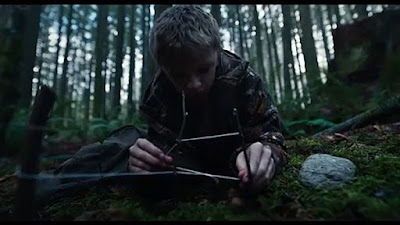 It will be a shock to no one who reads this blog with any regularity that I am a fan of Guillermo del Toro. That said, it’s worth noting that del Toro has a much better track record as a director than he does as a producer. If you remove his own directorial efforts from his producing and executive producing roles, it’s much more hit or miss. On the one hand, you get a masterpiece like El Orfanato and on the other, you get Mama. Sadly, Antlers falls more on the Mama side of the scale both in terms of overall quality and to a disturbing degree in terms of the overall story.

Antlers is a new spin on the Wendigo myth. We start with what feels like a poem in Ojibwa that seems to talk about something like a vengeful spirit arising because of the destruction of the environment. That, we will soon learn, is the Wendigo of the story. Or that’s the idea. In truth, our Wendigo doesn’t really seem to have a particularly serious environmental bent to it. This may be the cause of its arrival, but it’s not like the creature is specifically hunting down corporate executives dumping toxic waste into Oregon’s water tables or greedy lumber company bosses.

Our initial victims will be a couple of guys cooking meth in an abandoned mine in Oregon. One of them, Frank Weaver (Scott Haze) has brought along his young son, Aiden (Sawyer Jones). The two men are attacked in the mine, and before we cut away to the opening credits, we see Aiden wandering toward the mine opening, wondering what is happening to his father.

From there, we show up in a school in the nearby town. Frank Weaver’s older son, Lucas (Jeremy T. Thomas) is struggling in school suddenly for an unknown reason. He is sunken-eyed and withdrawn and is also a victim of several bullies. His teacher, Julia Meadows (Keri Russell), is concerned about him and speaks to her brother Paul (Jesse Plemmons), the newly appointed sheriff. As it happens, he’s aware that Frank Weaver has had a lot of legal trouble in the past, but since his wife died and there is no one to take care of the boys, he is unable to arrest him.

Of course, as we soon discover, the reality is that Frank Weaver is becoming the new avatar of the Wendigo, and it’s become the responsibility of Lucas to keep him fed. Aiden is being kept with his transforming father as a sort of hostage to force Lucas to continue to bring him food in the form of roadkill. Meanwhile, Julia grows more and more concerned with Lucas, and bodies start turning up around the county. Paul is forced to bring in the retired sheriff (Graham Greene) to help, and as an Ojibwa, Sheriff Stokes is not shy about the potential of a more supernatural reason for what is happening.

There’s a lot that could be done with Antlers that simply hasn’t been done, and it’s a shame. The main part of this is the environmental angle of the story. We’re led to believe at the beginning that this is happening because of environmental damage. The Wendigo, then, is a sort of avatar of nature, causing death and destruction to restore something like balance by removing the disease of humanity. The problem is that this doesn’t play out in what happens at all. Frank slowly turns into the creature (and the monster looks great, to be honest), but the people who he hunts down and the people who die are more or less random. It’s the people who show up at the house to check on Lucas and Aiden. It’s people who are, as much as they can be, innocent of whatever crimes are being repaid by the creature’s presence.

There is also an issue with legend, myth, and fairy tales that is quickly abandoned. We spend a good amount of time at the start of the film with Julia talking to her class about myths and trying to get them to discuss or create their own myths. Eventually, we get Lucas talking about his story, and it’s clearly allegorical about him, his father, and his younger brother. And then it’s dropped. We never get back to it, and it could have been an interesting touchstone for the entire film.

Antlers is a missed opportunity. There was a great deal of potential here for a story that could have had a real message that made it worth watching. Instead, it’s just a creature feature with an admittedly cool monster and not much else.

Posted by SJHoneywell at 3:32 PM