The (Not So) Straight Story 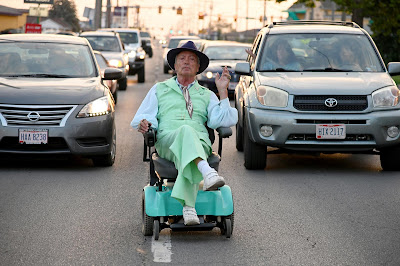 I say regularly that the Oscar posts on this site are not a celebration of the Academy but a reckoning. After watching Swan Song (the one with Udo Kier and not the one with Mahershala Ali), it might be closer to say that this is an indictment. The entire ridiculousness surrounding Will Smith could have been solved by nominating the right people. For starters, Jason Isaacs should have been nominated for Mass, but the fact that Udo Kier never got a look is a damned crime.

Kier has been in some very strange movies over the course of his career, and it would be easy to write him off as someone who did a lot of strange, experimental horror and the like. It would be easy to think of him as someone who is more gimmick than anything else. Swan Song demonstrates just how much of a lie that truly is. If he never did anything else, if everything else he had ever done was garbage, he would have this movie to look back on as his career. For a younger actor, this is a career movie, and for someone the age of Udo Kier, it might well still be that.

Swan Song is very much like The Straight Story on the surface (hence the name of this review). An old former hairdresser in Sandusky, Ohio named Pat Pitsenbarger (Kier) has been wasting away in a retirement home when he receives a visitor. A former wealthy client named Rita (Linda Evans) has died and left in her will that Pat should do her hair and makeup, for which he will be paid $25,000. But, as it happens, Pat and Rita left on bad terms, the reason for which is slowly revealed over the course of the film. We also learn that Pat’s protégé Dee Dee (Jennifer Coolidge) opened a salon across the street from him and ran him out of business.

Initially, Pat refuses the job but then thinks better of it. He goes on a journey of sorts from his retirement home to the funeral home, reliving his past live in Sandusky as he goes. The trip is one made on foot, through hitchhiking, and by any methods he can find. Along the way, he visits the grave of his old partner, the site of where his home was, and places around the town that were important to him. Among these is a gay bar where he used to perform; he discovers while there that it is set to close. Some people remember him; some don’t. And a few times, it’s clear that the conversations Pat is having are going on in his head as he comes to terms with his life, his impending death, and the death of the woman who may have betrayed him in some real ways.

Like The Straight Story, Swan Song is both about the journey and the destination, in large part because the journey is the destination. Slowly, as Pat comes to terms with whether or not he will do Rita’s hair one last time or not, we learn everything we need to know about him, what happened to his world, and what happened to everything that he lost.

In that respect, Swan Song is a character study, but it’s much more of a study of the life of a man. Evidently, a great deal of this is based on reality; there was a Pat Pitsenbarger who was a hairdresser and a gay icon in Sandusky. The plot here is literally nothing more than Pat making his way to the funeral home and deciding what to do, reminiscing along the way. It’s the reminiscence that matters, though, because it’s through this that we see who Pat is, who he has been, and the loss of the world he once inhabited.

I cannot stress enough just how thoroughly Udo Kier inhabits this role. Pat Pitsenbarger is a real person in this film, someone with real opinions, who remembers much of the past, but forgets some of it as well. This is someone with style and flair and who had a genuine past and who is coming to terms with that world being gone. Swan Song is about loss in many respects. Some of this is tangible and real loss, loss that we expect—the deaths of friends, the loss of important places to us—but some of this is harder to understand. It’s more ephemeral, and because of it, perhaps more important.

Pat’s world, Pat’s past, is going away, and not just because he is old. Pat is a rare survivor from the AIDS epidemic, an elder gay gentleman who lived through the worst of the plague and lost friends and loved ones in one way or another to AIDS and HIV. At one point, sitting on a park bench with an old friend named Eunice (Ira Hawkins), the two talk about the local gay bar closing along with other safe places from their past. Eunice opines that gay bars aren’t needed anymore when they can openly hold hands at Applebee’s.

And that’s really what this is about. There’s a wistfulness that the secret world of gay culture, the part that was just for them, that they could keep everyone from, is no longer necessary, and so they themselves are no longer necessary, either. The world has moved on; it’s gotten so much better in this respect, but those victories come with losses, and some of what is lost might be beautiful and special.

This is a beautiful and affecting movie. And the fact that Udo Kier walked through awards season without making a ripple is criminal.

Why to watch Swan Song: Udo Kier.
Why not to watch: No good reason. This is a masterpiece.