Got a Black Magic Woman 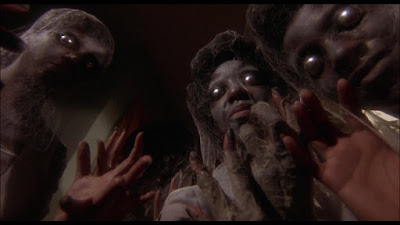 In 1973, there was a movie called The Girl Most Likely to in which a nerdy woman played by Stockard Channing, after a serious accident, has her face reconstructed so that she is both unrecognizable and gorgeous. She uses that new sex appeal and anonymity to go back through her previous life, seduce all of the men that wronged her, and kill them. If you replace Stockard Channing with Marki Bey, replace the car accident with her boyfriend being murdered, and add in a heaping helping of Voodoo, you end up with Sugar Hill.

Sugar Hill is a Blaxploitation film that dabbles in the same end of the cinematic swimming pool as Ganja & Hess and Blacula. I name those two films specifically because I genuinely like both of those films, and Sugar Hill is a hell of a lot of fun. It’s a hard film to dislike, even if it ultimately doesn’t have a great deal of plot.

Diana “Sugar” Hill (Marki Bey) is a professional photographer whose boyfriend Langston (Larry Don Johnson) owns a nightclub. The club is successful, which makes it a target for a local mob boss named Morgan (Robert Quarry). When Langston refuses to sell, Morgan and his thugs beat Langston to death. Grieving and desperate, Sugar meets with Mama Maitresse (Zara Culley), a Voodoo priestess who puts Sugar in touch with Baron Samedi (Don Pedro Colley), the lord of the dead. She offers her soul for the power of revenge over her enemies. Baron Samedi responds by giving her the power over his undead zombies, which she will then use to carry out her revenge against the men who killed Langston.

The main fly in the ointment is Valentine (Richard Lawson), Sugar’s ex, who also happens to be a lieutenant on the local police force. Valentine is called in to investigate the first strange death that follows Langston’s demise, and there are a number of distressing clues—bodies with traces of dead flesh on them, centuries-old slave shackles found at crime scenes and the like. As Valentine gets closer and closer to the truth, there is a danger of him stumbling onto what is really happening, a problem for Sugar, who would prefer nothing bad happen to him.

The biggest issue with Sugar Hill is that the plot is literally what I’ve said here. Langston gets killed, Sugar finds a way to get the undead to carry out her revenge for her, and she then tracks down the men responsible for Langston’s death and uses the zombies in various ways to kill them off. There are no additional complicating factors. One guy dies and we move on to the next one. It’s not unlike if The Abominable Dr. Phibes didn’t have much in the way of completing his revenge and no real set goals once that revenge was complete.

Everything else really works, though. The story is a lot of fun even if it’s as simple as it turns out to be. The zombies are great to look at. They are ashen, which gives them a recently-dead appearance even if it is heavily implied (slave shackles, etc.) that they are hundreds of years old. They also have bulging, opaque eyes that appear to be just plastic lenses affixed to them. It’s a great look—they’re really sinister, and while the initial viewing of them is more surprising than scary, they end up being really effective.

It's also worth saying that Marki Bey comes across initially as a sort of Pam Grier stand-in, but she deserves a lot of credit and respect in her own right. Bey is great as the title character, and someone we immediately like and root for. She’s sexy and in control, and we can even agree with a lot of what she’s doing, because her motivation is completely understandable.

It's Don Pedro Colley’s Baron Samedi who steals the show, though. Initially, he’s got a great scene where we are introduced to him as Sugar calls on his aid. It’s not clear in that moment, but Baron Samedi will show up at each of the killings of Sugar’s rivals. In many cases, it’s Samedi who leads the bad guys to their doom, and in each case he delights in the pain and suffering that is caused. It’s a fantastic role, and it’s a shame it’s not known as well as it should be.

If there’s a real knock against Sugar Hill, it’s that the movie is really only tangentially horror. The zombies are scary in their own way (“alien” is probably a better word for them—they’re more unnerving and disturbing than they are scary), but the terror isn’t something felt by us. The monsters here are the people Sugar is getting revenge on. The zombies, normally something that would cause fear in the audience, become instead a weapon of righteous anger and purified revenge. The zombies are the good guys in this film, and we end up cheering for them as much as we do for Sugar.

Why to watch Sugar Hill: It’s very satisfying.
Why not to watch: Not much of a plot, honestly.

Posted by SJHoneywell at 4:04 PM