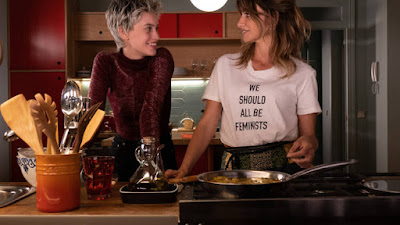 There are a few people in film who I will watch in pretty much anything. Toni Collette and Patricia Clarkson come to mind. There are others I could name, probably a dozen or so, but all of them will always take a back seat to Penelope Cruz. I am fond of saying that I would watch her fold laundry, by which I mean that I think she is capable of making just about anything interesting. And so I was interested in seeing Parallel Mothers (or Madres Paralelas), Cruz’s nomination from the most recent Oscars.

Its actually not that hard to figure out where this is going. I figured out the main plot twist less than half an hour in. The big twist happens relatively soon in the movie, although I’m not going to spoil it here. It’s not that hard to guess, and for a filmmaker like Pedro Almodovar, I had higher hopes for where the story goes in that basic sense.

Parallel Mothers, unsurprisingly, is the story of two women who happen to have their babies at th same time. They are very different women and in very different places in life and in their reactions to their pregnancy. Janis (Cruz) is a photographer. She gets pregnant by Arturo (Israel Elejalde), an archaeologist with whom she does a photo shoot. Arturo is already married and his wife is suffering from cancer. When Janis eventually tells him about the baby, he wants nothing to do with it and suggests an abortion. Janis decides against it and want to have the baby, so she goes through with it, asking nothing of him. She cuts the relationship off completely and is excited for the idea of becoming a mother.

The other mother is Ana (Milena Smit), who is young and terrified and is saddled with a mother (Aitana Sanchez-Gijon) who is much more concerned with her acting career than anything else. As it happens, Ana and Janis are in the hospital at the same time and have their babies at the same time. Some time later, Arturo shows back up at Janis’s place to meet the baby. When he sees her, he decides that baby Cecilia is not his. You know where this is going, right?

That’s exactly where this is going, and things become far more complicated when Janis catches up with Ana and discovers that Ana’s baby has died of crib death.

Coinciding with much of the story is the element that brought Arturo and Janis together in the first place. In Janis’s village, there is a legend of a group of ten being murdered and buried in a shallow grave by the fascists in the Spanish Civil War. As an archaeologist, Arturo can get the clearance to excavate the grave and identify the remains, which according to the legend, include Janis’s great-grandfather.

So what can I say about Parallel Mothers that will feel profound? Honestly, not a lot. Milena Smit is very good in this, but it’s absolutely Penelope Cruz’s movie from start to finish. I am biased toward Cruz, of course, but she is near-perfect on screen throughout this. I expect no less from here, and I was not disappointed.

BBut is it any good? That’s not as easy a call to make. I like Pedro Almodovar as a filmmaker, and I have a lot of expectations in terms of what he should bring to the table. One of those things is a fierce originality. That’s the one place where >Parallel Mothers is really lacking in terms of the main story. The underlying narrative about missing bodies and people killed by fascists as well as uncovering the truth of those times is important, but it gets lost in many places beyond the opening and the close. There’s a metaphor here somewhere, but the film would rather remain opaque to it.

There’s a good movie lurking inside Parallel Mothers somewhere. It’s just not this one to a large extent. Penelope Cruz cures a lot of ills, though. After all, I’d watch that woman fold laundry.

Why to watch Parallel Mothers: Penelope Cruz is a damn treasure.
Why not to watch: It’s surprisingly unsurprising.