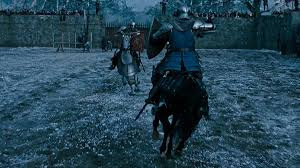 When The Last Duel came out, there was some initial thought about Oscar time, but the film seemed to tank at the box office. Ridley Scott famously blamed the failure of the film at the box office on Millennials not having the attention span for a movie of this length or it not appearing on their cell phones. That seems like sour grapes, apologizing for a movie that is, to be honest, too damn long.

I’m not going to apologize for that opinion. The Last Duel is very much in the style of Rashomon in the sense that we get three different takes on the same story, three perspectives on a tragedy, concluding with the duel in the title. That may seem like that means there’s a lot of ground to cover, but Kurosawa did four version of the same story in Rashomon and did it in an hour less of running time. The Last Duel is bloated, and while there’s plenty here that’s good, there’s a lot that can and should be cut.

The basic story comes from a book about an actual trial by combat in Medieval France. Because I feel like I should be up front about the nature of this film, I do want to discuss the very basic plot. The duel in question is between Sir Jean de Carrouges (Matt Damon) and his former friend, Squire Jacques Le Gris (Adam Driver). The duel occurs because Carrouges’s wife Marguerite (Jodie Comer) has accused Le Gris of raping her. It should not be a surprise, then, that our three versions come from Jean de Carrouges, Jacques Le Gris, and Marguerite de Carrouges, in that order.

So what does that mean? That means you’re first going to see the story from the point of view of the husband. This pass through the story gives us a man who is frequently wronged by a man he considers a friend, often because of the interference of Pierre d’Alencon (Ben Affleck dyed very blonde), the count to whom both he and Le Gris have pledge fealty. This begins with Marguerite’s dowry being taken by d’Alencon and given to Le Gris to settle debts, preventing Jean de Carrouges from becoming financially solvent. In fact, de Carrouges feels as if Le Gris has used is influence not only to enrich himself but to damage de Carrouges’s position. Eventually, he heads to Paris to collect a debt and returns to find Marguerite claiming to have been raped by Le Gris. In his version, of course, is an attentive husband, concerned for the welfare of his wife, level-headed and in control, and wronged by society.

In Le Gris’s version, we’re going to get a vastly different look at the same events. From his eyes, de Carrouges is going to come across as more unhinged and brutish, an uncultured man capable only of battle and not deserving of the wife that he has. Le Gris sees Marguerite as a kindred spirit, educated and intelligent and in need of something more than the rough attentions of her husband. Le Gris, we will also find out, is something of a sexual workhorse, although he takes second place to the sexual proclivities and antics of Pierre d’Alencon. In his world, the rape was not a rape, but consensual sex with a woman who is clearly attracted to him.

And then we get Marguerite’s version, and I think we’re supposed to see her view of these events as the most accurate. While there is some evidence of the brutishne ss and boorishness of her husband—and no real love in the marriage—de Carrouges isn’t a man completely without merit in her eyes. In fact, he is willing to listen to her and credit her for good advice given to him, but he is still very cold and rough. Le Gris is someone she finds attractive, but not someone to trust, and it is clear in her version of the story that the rape was indeed a rape.

This is a well-made film; it is, after all, a Ridley Scott film. It’s filmed well and acted well, and while it is desperately long for the story it wants to tell (even telling it three times), it does tell the story well. There isn’t a great deal of action here, although the conclusion is the duel itself, and it’s intense. But this is a sort of ugly triangle up to that point, and while there are moments of battle here and there, it is much more a relationship drama than anything else.

I realize that this is based on a book, and the book is based on a true case of a duel being fought in France. This is, at least at its base, non-fiction in the broad strokes of the story. That said, I am unbelievably tired of trauma of women being used as story motivation. I know that these are stories that need to be told at times. I know that the trauma of women needs to be talked about and dealt with, but there are better ways to do this than to have such trauma serve as character growth or the motivations of the male characters. Women’s trauma shouldn’t be a plot device, and I’m desperately weary of that being the case.

Look, The Last Duel is well-made, and 20 years ago, I wouldn’t have been nearly as put out by where the plot goes, but I’m a lot more aware of it now, and I’m exhausted by it.

Why to watch The Last Duel: Ridley Scott really does this better than most.
Why not to watch: Women’s trauma needs to stop being used performatively.

Posted by SJHoneywell at 3:08 PM