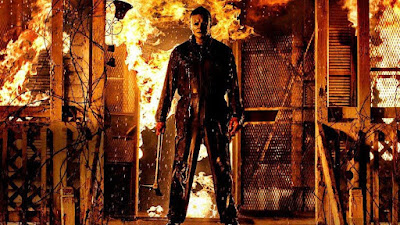 In the world of slasher movies, there are few final girls who can match up with Laurie Strode. Oh, sure—Ellen Ripley, Nancy Thompson, Sidney Prescott, but Laurie is the OG final girl. A lot of the final girl tropes come from Laurie and the original Halloween. Unlike many, I liked the direct sequel from 2018. I thought it played with the mystique of Michael Myers well and gave us a realistic update on Laurie Strode. So I was very interested to see where things would go with Halloween Kills.

The answer to that question, sadly, is “nowhere interesting.” That’s a real shame, because there was potential here and a very clear idea of where it wanted to go. There’s a lot here that wants to connect with the original series and maintain the lore of Michael Myers, but the film spins off in unfortunate directions, and never gets to where it wants to get to.

As with the original sequel from the original film, Halloween Kills picks up immediately following the previous film. When we last left the Strode residence, Laurie (Jamie Lee Curtis) was being led away in an ambulance, her house an inferno with Michael (played by both James Jude Courtney and Nick Castle) inside. However, since this is a sequel, it’s not a spoiler when Michael manages to get out of the house and also kills the entire first response team in the process.

And, well, that’s where we’re going to go here. Michael is going to make his way around the neighborhood, killing anyone and everyone he comes across, methodically depopulating the town of Haddonfield while Laurie (much like in the original sequel) is in the hospital recovering from her trauma. The body count is in the multiple dozens, and none of it has any meaning. That’s sort of the thing that is lost in the current version of the Halloween franchise, or at least in this film. These deaths have no point. They’re just

The second act of the film very much wants to be a treatise on the idea of panic and mob action. As it happens, there is was a second person who escaped from the institution with Michael. Naturally, he’s going to be mistaken for Michael and the mob of angry and terrified Haddonfielders are going to track him down and kill him. This could be a really interesting place to take the film, something that would actually have a point more than just watching Michael stab people.

That’s really the shame of Halloween Kills; there’s a great deal of potential here for this to be about something more than just a slasher doing slasher things. Like any good supernatural slasher (and Michael very much becomes that in this film), Michael is a force of nature who could be used by the filmmaker to show us something about ourselves as stupid, panicky primates who are at the mercy of our adrenal glands. But no, we start moving in that direction, it reaches a climax, and suddenly everyone is smarter, learns a minor lesson, and immediately takes that to their grave. The lesson that could have been learned is essentially worthless because the people who needed to learn it end up dead anyway.

The truth is that I don’t really love slasher movies as a genre. They depend almost entirely on jump scares, which are the undercooked McNuggets of horror movie scares. Most of them are essentially plotless, just giving the supernatural killer an endless conveyor belt of victims until there’s one person left at the end. There are those that transcend the genre, of course--A Nightmare on Elm Street, Scream, the original Halloween and others, but most of them are pretty joyless. The reboot of the franchise sequels in 2018 started out on the right path—it was a good idea that could really go somewhere. Sadly, where it went was Halloween Kills.

Will I watch the third and final Halloween Ends when it comes out? Yes, I will, eventually. But I’m going to do so only because I’ve already come this far. I really wanted and expected to like Halloween Kills on the strength of Halloween (2018). Now I’m wondering why I want to bother with the next one based on the weakness of this one.

Why to watch Halloween Kills: You’ve come this far.
Why not to watch: Laurie Strode deserves better than this.

Posted by SJHoneywell at 4:47 PM