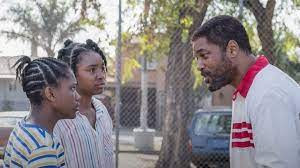 I knew I would get to King Richard sooner or later. While the movie itself hasn’t been surrounded by a lot of controversy, what happened at the Oscars certainly has. I’m not going to comment on it after the next sentence or two. I think everyone acted pretty badly, and that’s all I’m going to say. But it’s true that what happened has cast a shadow over the film. There’s no way out of that. You can’t say King Richard without thinking of what happened on Oscar night.

It's also worth saying that it’s really useful to have friends with a particular power. I have a number of friends who are librarians. One of them noticed that I had put King Richard on hold and was like 20th on the wait list, so she purchased a copy for the library and reserved the copy for me, so I got it about a month earlier than I thought I would. It’s good to have friends who are there to help you out, even when it’s something minor like this.

Anyway, King Richard is the biopic of Richard Williams (Will Smith), the father of Venus and Serena Williams. If you’ve spent the last couple of decades under a rock, you probably still know that Venus and especially Serena are two of the most dominant athletes of the last…forever. Women’s tennis had its fans, but the Williams Sisters were news. They became the sport of women’s tennis and still have an impact today.

This is a film very much about Richard, though, at least for much of the first 90 minutes or so. Essentially, Richard Williams is a man who had a long-range plan for his youngest two daughters. He molded them to be champions of tennis, a strange choice for a family from Compton, California. Everything about his plan was unorthodox (to say the least), and much of the film is about the fact that he was domineering, dominating, and brooked no dissent from the path that he laid out for his daughters.

And that is the story here. Richard is focused entirely on making his daughters champions, and it’s never really addressed if the girls themselves wanted this. It’s essentially assumed they do, but it’s also true that someone who is in that situation and at that age (Venus Williams went pro at 14) is easily swayed into wanting something she is told to want.

Smith, for all of the controversy that has followed this film, is very good. He is ably supported throughout. This starts with Aunjanue Ellis, who plays the girls’ mother, Oracene. But this is equally true of Sanniyya Sidney (Venus) and Demi Singleton (Serena), both of whom are excellent. I hope they both have tremendous careers, because if this is any indication, they are both enormously talented. Also worth seeing is Jon Bernthal as the girls’ coach Rick Macci.

There are a couple of things worth going into here, though. To be blunt, King Richard is a bit of a BOSUD, or biography of someone undeserving. Admittedly, he stuck to his guns and his plan worked, but there’s no indication that things would have been any different if he had gone a more traditional route with his daughters. It’s also worth saying that, regardless of his plan, it helped that Venus and Serena Williams are both enormously, prodigiously talented.

King Richard is a much better film in the last hour, because it is here that it starts to focus on Venus Williams and her decision to turn pro at 14 much more than it focuses on her father. Venus and Serena both are people worthy of a biopic, and frankly, I was a lot more invested in their stories than I was in the story of their father.

Bluntly? I think Richard Williams is the sort of person who I would hate being around. He got lucky in the fact that his daughters might well be the greatest players of their generation (and Serena of any generation), and he’s exactly the type of person who will take the credit for that fact. He spends a good portion of the film instilling the idea of staying humble in his kids and is himself absolutely convinced of his own genius.

That makes this a hard film to watch, but it’s worth gutting it out to see Venus take the court.

Why to watch King Richard: Venus and Serena Williams are two of the greatest athletes of the age.
Why not to watch: Richard Williams is a difficult man to be around.