It's Not a Minotaur 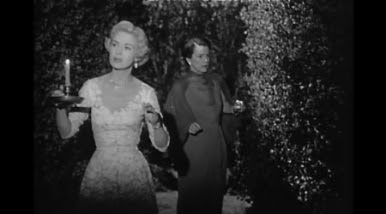 When you pull up an older horror movie, you’re never really sure what you’re going to get. Sometimes, you get something that’s a lot of fun and sometimes you get The Maze. This is a movie that desperately wants to present its audience with something new and terrible and does so for two acts. And then the third act happens. I’m not going to spoil the third act of this; it deserves to be seen. Suffice it to say that what happens in the third act of this film is one of the most unintentionally funny things I have ever seen in a movie in years.

It's almost a shame because the idea here is a very good setup for a horror movie. Gerald McTeam (Richard Carlson), heir to a Scottish castle and title, is engaged to Kitty (Veronica Hurst). Everything is fine until Gerald receives a telegram that tells him to return to the family castle immediately. He does so, and also ceases communication with Kitty and her aunt Edith (Katherine Emery). Soon enough, a missive arrives from Gerald releasing Kitty from their engagement and more or less telling her not to ever seek him out.

Not one to be put off without so much as a reason from a man she was ready to pledge her life to, Kitty and Edith head off the Scotland to find the family castle of the McTeams. When they do they find a place shrouded in secrecy. Worse, they discover that Gerald has aged and has become stern and secretive. Edith wants to leave immediately, but Kitty has decided that she needs to come to the bottom of what has happened with Gerald. She invites some friends to the castle just to get some more people into the area and to see if she can figure out what is going on. It doesn’t help her investigations that she and Edith are locked into their rooms every night and that Gerald is clearly upset with their presence.

All of this is good through the first two acts. The Maze does a fine job of creating a sense of mystery and even a bit of dread. Because the film is only 80 minutes long, it doesn’t have enough time to really build up the suspense and danger, but there is a definite effort to do this. Much of this centers around the maze on the castle grounds. The maze is often shrouded in fog, and as the third act begins, Kitty and Edith manage to escape their room and enter the maze to see what is happening.

And even at this point there is a good and interesting sense of dread and creepiness. This isn’t hard to do when you have a maze to work with. There’s something inherently a little scary about them. The idea of being lost in a labyrinth with something unknown, something potentially dark and dangerous and not knowing the way out is the stuff of nightmares. And then we finally see what is in the maze and it all goes to hell.

I cannot stress this enough. In any movie, you eventually have to show the monster to the people in the audience. That moment is an important one. You can make or break a movie with what the monster looks and acts. It’s always going to be a little disappointing—people’s imaginations are always going to be a little scarier than what you can show them. It’s why the ending of The Blair Witch Project is so divisive—some people wanted to see the witch and others were happy that we never really got to see her. Sometimes you’re going to get a monster that works (say, Cloverfield) and sometimes you’re going to get the creature that lives at the heart of The Maze. I’m literally still giggling about it, and it’s been a good hour or so since I’ve seen it.

There’s also a moment in the middle of this film (a “moment” because I watched this on YouTube) of intermission. I cannot stress enough that this movie is 80 minutes long and it has an intermission. Why? Is it to get it to something closer to traditional feature length? Or is it to give the audience a moment to think about what might be lurking in the heart of the maze before the big reveal.

I desperately wanted to enjoy The Maze and I ultimately did. It just wasn’t for the reasons that the filmmakers wanted me to.

Why to watch The Maze: There’s a fun sense of dread in the first two acts.
Why not to watch: The payoff.

Posted by SJHoneywell at 5:24 PM