They Grow Up so Fast 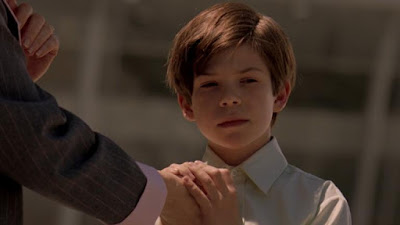 There’s something upsetting about evil kids in movies. You’re already thinking of a bunch of them right now. Well, to that mix you can add the title character of Joshua, a sociopathic 9-year-old who decides that he’ll do whatever he can to get exactly what he wants. You’ve seen a movie like this before, more than likely. There are shades of The Other, Orphan, The Good Son, The Bad Seed and even The Omen here.

You’re going to get a lot of this from the set-up. Parents Brad and Abby Cairn (Sam Rockwell and Vera Farmiga) have a son named Joshua (Jacob Kogan), who is a piano prodigy and dresses like the most repressed Republican in the world. When the movie starts, the Cairns welcome their new daughter Lily. It’s clear right away that Lily is going to cramp Joshua’s style, and since Lily proves to be a difficult baby, things are tense right away. Joshua starts to bond with his uncle Ned (Dallas Roberts) and uses his sister and her difficulties to move away emotionally from his parents.

Very quickly, Joshua starts acting strangely. We’re told at a few places that he is precocious—his teacher talks about having him skip a grade or even two. And he’s also very disturbed, something that comes to the forefront much more slowly. Abby’s mental state rapidly deteriorates. The constant crying of Lily, the work being done in the apartment above her, stretched and stressed nerves, lack of sleep, and the eventual arrival of Brad’s evangelical mother (Celia Weston) fray her badly. She is soon medicated, and it doesn’t seem to be doing much to help her. The family dog dies suddenly and under mysterious circumstances. And Joshua starts doing things that feel suspicious but are plausibly deniable.

Perhaps the best way to explain what Joshua really is is to look at it as a sort of prequel to We Need to Talk About Kevin. The same sort of sociopathy is at work here, although with different ends in mind. One thing that is quite effective is, as Joshua’s plans start to come together, that retaliation against him would be impossible. Who would believe a child capable of (for instance) faking child abuse, or of working in ways to play with the edges of his mother’s sanity? Or of potential murder?

I like Sam Rockwell as an actor and tend to like a lot of his performances. There’s a bit of his Galaxy Quest persona in this one; he comes across a great deal like a frat boy who wants everyone to think he has the whole world on a string. There’s a lot of bluster in the character. It feels a lot like an earlier Sam Rockwell performance, but it’s somehow not.

Is it any good? Hard to say. Joshua has some good ideas and ideas that are worth exploring, but I can’t help but think that they have already been explored a lot better in other films. It’s difficult to recommend Joshua when The Omen and The Bad Seed exist. Hell, this is hard to recommend with the existence of The Village of the Damned.

This is the kind of film that would potentially make someone rethink the idea of having children. Kind of. It feels like it could go there, but it also seems so much less realistic than We Need to Talk About Kevin, which is equally dark and terrible, and a hell of a lot better and more believable.

This could be a good film, and there are things that I like about it, but ultimately, I’m just not that interested. I’m so uninterested, in fact, that I don’t have anything more to say about it, other than it was a pleasant surprise to see Michael McKean as Brad’s boss, a rare dramatic role for him, and he pulls it off well.

Why to watch Joshua: It’s upsetting in the way that a psychological horror movie should be.
Why not to watch: There’s a lot here that doesn’t seem to pay off.