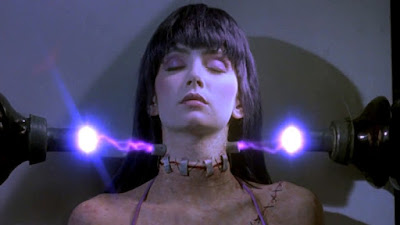 One of the classic archtypes of horror movies is the Frankenstein monster. Lots has been done with the concept since Mary Shelley created the idea of the modern Prometheus. Some of these have been good and serious. Others have been terrible. The idea of a created human, something like a golem but made of flesh, is an ancient idea—ancient enough that you could call the creation of Adam in the Old Testament a version of a golem story. Of all of the various versions of bringing the dead back to life in whatever form, few have been as wholly bizarre as Frankenhooker. (And because it’s wildly funny, the Spanish language version of the film is called Frankenputa.)

It's not surprising that there are going to be a lot of references here to Dr. Frankenstein and his monster, but there are echoes of other stories (and much worse films) here. For instance, there are absolutely shades of The Brain that Wouldn’t Die in this, just by way of example. Normally, that wouldn’t be something worth bringing up, but that’s exactly the sort of movie that would be an inspiration for director and co-writer Frank Henenlotter.

Jeffrey Franken (James Lorinz) is a med school washout who likes to experiment with body parts and electricity. When the film starts, we see him experimenting with an eye shoved into a brain, for instance. Jeffrey has cooked up a remote control lawn mower for the father of his girlfriend Elizabeth Shelley (Patty Mullen). Of course things go haywire and Elizabeth is run over by the lawnmower and chopped into pieces.

In keeping with the theme of the movie, it will not be surprising to learn that Jeffrey has managed to save a few of Elizabeth’s body parts, including her head. He has created an estrogen-based serum to keep her body parts preserved while he works on plans to revive her with a new body. When news comes of a once-in-a-century lightning storm is a couple of days away, he figures that he needs to act quickly. He makes the decision to use a prostitute’s body for Elizabeth, and goes about looking for the right one. This brings him into contact with Zorro (Joseph Gonzalez), a pimp who keeps his girls working by addicting them to crack. Jeffrey buys a bag and makes it lethal, which will give him the body parts he needs.

But of course there will be problems. He can’t decide on whose body he wants, the hookers find the supercrack (yes, that’s what he calls it), and they smoke it…and explode. And now Jeffrey has the body parts he needs, a killer pimp on his tail, and a thunderstorm on the way. When Elizabeth comes back (because of course it all works), she’s got the body of multiple prostitutes, a mind affected by that, and the side effect of killing anything she touches in a sexual way. That means lots more body parts to come!

I had seen Frankenhooker in the past and remembered the broad strokes of the film but not the details. For instance, I completely forgot that when Jeffrey needs inspiration or headache relief, he trepans himself with a power drill. I forgot that his mother, who appears only in a scene or two, is played by Louise Lasser. I forgot the weird collection of body parts that happen at the end of the movie.

Look, you don’t watch a film called Frankenhooker expecting high art. This is an objectively stupid movie in a lot of respects, but it doesn’t go for the “look at how stupid everyone is” trope that often happens in such a film. Most of the characters have legitimate motivations (even if its just access to drugs). It’s the events that are ridiculous, not the characters themselves. I have some respect for that—this is a film that at least takes its characters relatively seriously in terms of them being realistic within the scope of the film itself.

That said, it is dumb and it is gross. It’s also a film that leaves a lot of loose ends hanging. There are plenty of things that are never really resolved, like the Frankenhooker’s sexual killing spree, the fate of Jeffrey’s mom, or even any resolution for Elizabeth’s family. These elements are just ignored for much of the film. A few more minutes tacked in here and there—the running time is a mere 85 minutes—wouldn’t hurt in that respect.

This isn’t a good movie, but it is a fun one and an entertaining one for what it is. You should go into this with zero expectations, because those will absolutely be rewarded. Any thoughts that this will be anything more than body parts, partial nudity, and humor, though, is going to not go well for you.

Why to watch Frankenhooker: It’s gross, funny, and stupid.
Why not to watch: It’s objectively not very good.

Posted by SJHoneywell at 2:57 PM