While there are only six movies here, I watched a lot more than just these six off the giant list. Four more--Free Guy, Last Night in Soho, The French Dispatch, and Candyman were all movies I gave a full review to. I also watched Wonder Woman 1984, which wasn't on the list and was disappointing enough that it didn't even warrant a short review here. There were a couple of others as well. I recommned the Time Warp series of three films about cult movies. There's not a serious discussion here, but it's fun to listen to people talk about crazy movies they were in. 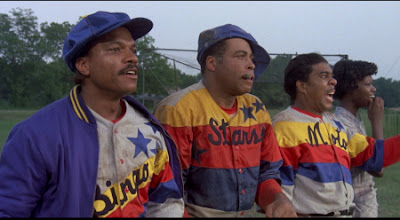 A Negro Leagues baseball movie with a very good cast, this does follow some pretty standard sports movies tropes. A group of Negro League players are upset with the way they are being treated and so decide to create their own team and barnstorm around the country. Naturally, the owners of the other teams want to stop them. Wacky hilarity and the sort of nastiness you would expect from corrupt owners ensues. There are real-world parallels here, with characters representing Satchel Paige, Josh Gibson, and Jackie Robinson playing on the barnstorming team. It’s fun, but ultimately not a lot more than fun.

William Peter Blatty’s first film as a director, but the second story in his Faith Trilogy (along with The Exorcist and The Exorcist III/Legion), we are in a mental hospital dealing with patients who are suffering trauma from the Vietnam War and other military projects. New psychiatrist Hudson Kane (Stacy Keach) finds a number bizarre afflictions besetting his patients, but he has is own problems as well. A tremendous cast includes Scott Wilson, Ed Flander, Neville Brand, Robert Loggia, and Moses Gunn, who is always critically underused. This feels like a stage play, but it’s really just a head-first dive into insanity with the possibility of redemption. 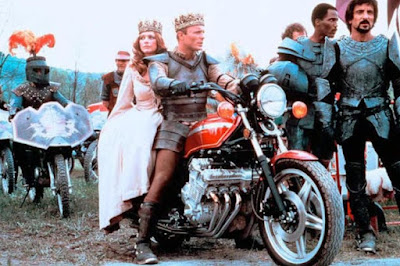 Only George Romero could pull off something this completely insane. A troupe of motorcycle-riding knights led by King William (Ed Harris with hair!) have a traveling Ren Faire-styled show that features jousting tournaments atop motorcycles. While Billy wants to keep this Camelot fantasy alive, rival Morgan (Tom Savini) is tempted by the promise of fortune and fame. It’s bonkers, and it’s inexplicably almost 150 minutes long. It’s also surprisingly gay-positive for 1981. Seriously, the jousting tournaments are an insurance nightmare and they’d all be jailed and bankrupt in a month, but it’s a hell of a crazy fantasy while it lasts. Ultimately, the fantasy has to end, as does the movie, but there are parts of it that are rather beautiful. 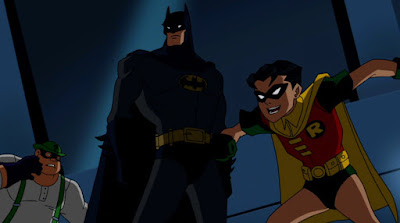 Batman’s second Robin is brutally beaten and killed by Joker. Soon after, a new crime boss appears in Gotham and starts taking over the drug trade around the city. Specifically, he goes after a criminal called Black Mask, who looks very much like Marvel’s Red Skull as a crime boss. Anyway, it’s soon evident that this new criminal, who goes by the name Red Hood, is highly trained and knows a bit more about Batman than is comfortable. It’s a good enough story, and it features a nice rogues gallery that includes Ra’s al Ghul and an appearance from the Riddler as well as a moment or two from Nightwing. It’s good, but I’m not convinced it’s great.

I haven’t caught up with all of the Marvel movies and I haven’t come close to all of the limited series shows, but I like Shang-Chi as a character, even if the traditional Shang-Chi isn’t an Americanized valet. Still, the martial arts action is fun and I do have a love for that, so I figured I’d give it a shot. It’s really nicely cast—seeing Michele Yeoh and Tony Leung is always a good thing, and I’ll watch almost anything with Benedict Wong in it, even if he’s not in it that much. It's fine, but so much of it doesn’t seem to fit in with what we have in the MCU; it almost feels like part of a completely different series. It’s mid-tier, and because of that, kind of disappointing. 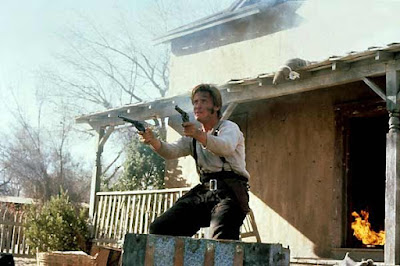 How do you make a generation interested in westerns again? Cast a collection of their generation’s young stars and hand them revolvers. Young Guns calls itself the most accurate version of the story of Billy the Kid, and it does follow the basics of the Lincoln County War. The draw here isn’t the history, but the presence of Charlie Sheen, Emilio Estevez, Kiefer Sutherland, Lou Diamond Phillips, and a few others riding horses and shooting pistols. It’s honestly better than it has any right to be, but don’t kid yourself; it’s not any better than just fun and pretty good. It inspired a sequel and almost certainly the gender-swapped Bad Girls.

Email ThisBlogThis!Share to TwitterShare to FacebookShare to Pinterest
Labels: Batman: Under the Red Hood, Knightriders, Shang-Chi and the Legend of the Ten Rings, The Bingo Long Traveling All-Stars & Motor Kings, The Ninth Configuration, What I’ve Caught Up With, Young Guns