We Need to Talk About Bruno

Films: Encanto
Format: Streaming video from Disney Plus on laptop. 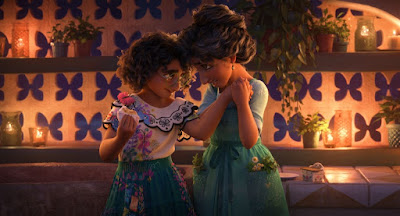 When you think of Disney animated films, there is a particular sense that you almost certainly have in your head. A lot of that is going to be the basic Disney Princess story. We’ve got a naïve (often) young girl who has some magical powers in one way or another, or who is special in some meaningful way and is going to spend the bulk of the film essentially finding the guy she’s going to marry. Disney has honestly gotten better at this in the last decade and a half. A film like Tangled, for instance, follows that traditional Disney pattern on the surface but gives our heroine a lot more agency. That’s more the case in Frozen. With Encanto, we’re changing a lot of the script, and the movie is all the better for it.

When I say that Disney is changing a lot of that script, I mean that almost all of the things that you associate with a Disney Princess movie are not here to the point where I’m not sure that our main character would even qualify as a Disney princess. In fact, she is the one person in her family who doesn’t have special powers. But I see I’m getting ahead of myself, so allow me to take a step back.

Mirabel Madrigal (Stephanie Beatriz) lives with her family in a magical house in a small village surrounded by mountains in Colombia. Her grandfather was killed by armed attackers in a military conflict, but his wife and three children are saved. The Madrigal family and the whole town are protected by a magical candle that burns in Casita, the Madrigals’ sentient house. When each member of the Madrigal family reaches the age of five, they are shown to a door in the house. When they open it, they are gifted with a magical ability that they can use to help the family and the villagers. All is well until Mirabel’s fifth birthday. When she opens her door, the door disappears, and she receives no gift. This event also causes her uncle Bruno (John Leguizamo), whose gift is prophecy, to disappear from the house and family.

We pick up the story on the evening of another door ceremony, this time for Mirabel’s young cousin Antonio (Ravi Cabot-Conyers). The ceremony goes well and he gains the gift of speaking to animals, but during the party, Mirabel sees a vision of Casita cracking and being destroyed. When she tells others of this, she discovers that there are some nervous thoughts about this from her grandmother (Maria Cecilia Botero) as well as both of her sisters. Sister Luisa (Jessica Darrow) is fabulously strong, but worried about her strength fading. Sister Isabella (Diane Guerrero) has an air of perfection and makes flowers bloom at will, but also feels pressured to maintain that aura of perfection in everything she does.

So, since we have to have a movie, things are going to get bad and the house is going to crack and Mirabel is going to have to find her uncle Bruno to figure things out and perhaps discover why she is the one who didn’t get a gift like everyone else.

There’s a great deal that Encanto does right. The first is that there is no clear antagonist in this. Sure, there’s someone whose actions create most of the problems here, but this is not a traditional foil in any respect. Encanto is a family drama, and as such, it doesn’t give us a specific antagonist to root against. The action is driven on by family relationships, not a struggle for power, a quest to be the most beautiful in the land, or a desire for dalmatian coats.

Second, importantly, there is no love interest here. While it’s try that part of the plot centers on Mirabel’s sister Isabella getting engaged, there is no love interest for the 15-year-old Mirabel, which is probably for the best. Isabella is probably the closest there is to a traditional Disney princess (flowers literally spring up at her command), but this is not her story. It’s also worth noting that Herculean Luisa was evidently the stand-out character with kids.

With any Disney film like this one, you can’t merely judge things on the story (it’s very good) and the animation (also very good). The songs are important, too, and the songs in Encanto are as good as you’re going to find from a family-friendly film like this one. It doesn’t hurt that they were penned by Lin-Manuel Miranda and that they are frequently catchy as hell.

What ultimately sells Encanto, though, is the character of Mirabel. Anyone who has eery felt outside of their own family, anyone with crippling Imposter Syndrome, anyone who feels like everyone puts too much on them and simultaneously expects nothing of them will find a great deal here to relate to. Disney is getting better at this and it shows.

Why to watch Encanto: Disney gets better when it moves away from formula.
Why not to watch: The credit sequence is literally 20 minutes long. 20 minutes!