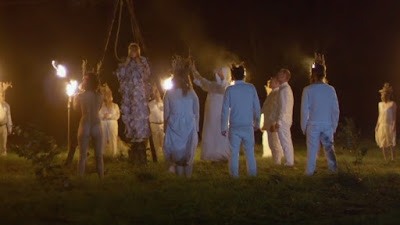 Watching movies more or less in the order they come across my desk creates some interesting ideas. What often happens is that I discover movies where a movie made first reminds me of a movie made later. I get the order mixed up in that respect. That’s clearly the case with Kill List for me. While I can see influence of a movie like The Wicker Man on this, I also want to say that it was influenced by movies like Hereditary and Midsommar. However, since this came out in 2011, that influence (if it exists) clearly runs in the other direction.

Kill List is a movie of two halves, or rather a first two acts that function one way and a third act that functions in an entirely different way. What this means is that we have a third act that, while clearly connected to the first two acts, it’s also very unexpected and strange. It’s also a movie that takes a few very dark turns, and since it’s about a couple of assassins taking a strange job, it starts out pretty dark.

Jay (Neil Maskell) has a contentious relationship with Shel (MyAnna Buring), his wife. Jay and his colleague Gal (Michael Smiley) are former military who have become hitmen since leaving the service. Jay has not worked in nearly a year because of a disastrous mission in Kiev, but now he and Shel are running out of money. They have a dinner party with Gal and his new girlfriend Fiona (Emma Fryer). Gal hints that he has a lead on a new job, which Shel urges Jay to take. During the party, Fiona heads into the bathroom and carves a symbol on the back of the mirror. She also takes a tissue from the wastebasket that has Jay’s blood on it from a shaving cut. Jay agrees to the contract and during the meeting, the client slices open Jay’s hand and then his own, essentially signing the contract in blood.

And then we get the hits. The first victim is a priest who evidently recognizes Jay when he sees him and thanks him just before Jay pulls the trigger. The next victim, called “the Librarian” evidently holds court over a collection of very disturbing videos. Jay tortures the man with a hammer (by far the most stomach-turning sequence, not least because the man continues to thank him while he is being beaten) while Gal opens the man’s safe, revealing more than enough money to pay them if they quit the job. They go off script, finding the person that the librarian got his films from and discover that the man’s files have complete dossiers on them, including the Kiev mission. The files also include the symbol Fiona carved on the back of Jay’s mirror, although he does not recognize this.

Jay and Gal attempt to get out of the third part of the contract, but are told that they will be hunted down and killed along with their families. And it’s here that things take a turn for the terrifying and the cult-influenced. I’ll leave it there so as not to spoil anything that happens. The cult ties, honestly, aren’t a shock, given what we’ve seen. How the cult seems to work is what is truly terrifying.

Kill List is one of those movies that it’s kind of impossible to say that you’ve enjoyed because there’s not a great deal here that is enjoyable. It’s fascinating in the same way that a movie like The Wicker Man is fascinating, but it’s so much darker. Most of this darkness comes from the fact that Kill List is never fully explained to us. We don’t know what motivates the cult that we encounter. We’re not given the meaning of their rituals. We never even learn what really happened in Kiev or why Jay and Gal seem to be targeted here. These are ultimately a series of events that happen in front of us that clearly do have a meaning to them, but to which we are never made privy.

Typically, I watch a movie and then write the review within 24 hours. That’s not what happened with me and Kill List. I watched this several days ago and have really struggled with my reaction to the film. Do I like it? That’s hard to say. As I said above, this isn’t really the sort of film that engenders “like” reactions. Do I respect it? Kind of. There’s a definite vision here, and the Ben Wheatley achieves most of his intended ends, I think. But it’s also a movie I don’t think I want to watch again. There are too many loose ends here.

I don’t mind some ambiguity in the films that I watch. In fact, good ambiguity is often going to get a more positive reaction from me than something that ploddingly hands us ever point and intention or beats us over the head with symbolism (see Oliver Stone for an example). But Kill List offers nothing here beyond the series of events that happens. I struggle with that, and so I struggle with Kill List.

Why to watch Kill List: The third act is not at all what you think it’s going to be.
Why not to watch: There aren’t just loose ends; it’s all loose ends.

Posted by SJHoneywell at 2:32 PM