Ten Days of Terror!: The Nanny

Film: The Nanny
Format: DVD from Rockford Public Library on The New Portable. 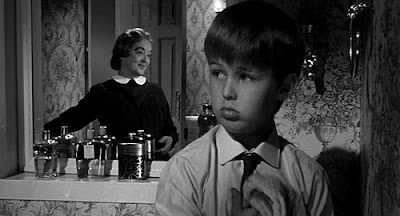 Of all the genres and subgenres of film, the one that I find the most inexplicable is hagsploitation, or my preferred name for it, psycho-biddy. Seriously, who decided that crazy old ladies would make for the sort of film that people would really enjoy? I mean, I’m not upset that they did, because there are some great films in the genre, but there are also a few missteps, like The Nanny. Don’t get me wrong: this isn’t a terrible film, but it is an ultimately disappointing one. We’re given an ending that the film absolutely doesn’t earn, and it’s a damn shame.

What we have is a very wealthy family that has undergone some terrible hardships. Bill Fane (James Villiers) is cold and distant from his family, perhaps due to the tragedy that befell them. Wife Virginia (Wendy Craig) has been almost infantilized, while son Joey (William Dix) is just now returning home after being sent to a boarding school that specializes in problem children. Why is Joey a problem? Because his sister Susy (Angharad Aubrey in flashbacks) died in an accident that hasn’t been fully explained.

The final member of this family is the unnamed nanny (Bette Davis), who is more than pleased to have Joey returning home. It’s not mentioned, but it certainly seems odd that she would have been retained by the Fane family with Susy dead and Joey at a boarding school, but it soon becomes clear that she also considers Virginia Fane one of her responsibilities as well. It also eventually becomes clear that she was Virginia’s nanny years before, as well as the nanny of her sister, Pen (Jill Bennett). Joey returns home with no trust of his nanny, refusing to have anything to do with her, and even refusing to eat anything that she has prepared. Joey is convinced that Nanny wants to kill him, and accuses her more or less of having killed Susy.

As the film moves on, Joey’s behavior becomes more and more reasonable as we learn that the nanny is less and less hinged in reality. Joey’s only real ally in any of this is neighbor Bobby Medman (Pamela Franklin), who is older than he is and curious about what is going on in the Fane household. Joey is about 10, I would guess, and Bobby perhaps 14 or so. Their relationship is oddly frank and almost sexual. One night, after accusing Nanny of attempting to drown him, Joey, clad only in a towel, goes and hangs out in Bobby’s room with her. It’s hard to tell if the relationship is one of budding sexuality or so completely innocent that that doesn’t factor in—it’s literally one way or the other with no real middle ground.

Anyway, as the film goes on, we learn bits and pieces about Susy’s demise and we see what happened from several different points of view. And ultimately, we learn if Joey is right to fear Nanny after all.

The Nanny is just on the cusp of the psycho-biddy subgenre in that it has a former glamorous actress in Bette Davis acting in the role of a crazy old lady, a la What Ever Happened to Baby Jane? This is clearly a film that wants to build on that same basic idea without going nearly as far as that film. Because of that, The Nanny ends up feeling tame in comparison to the other films of the subgenre. There’s a lot of crazy that could be happening here (as in Strait-Jacket, for instance), but the film doesn’t have the narrative chops to get us any further than just some disturbing moments. Oh, sure, the death of a child is always a disturbing idea, but there’s a lot more that could be done with a crazy-acting Bette Davis at this point in her career.

The standout performances, at least as far as I’m concerned, are Pamela Franklin and William Dix. Franklin ultimately had a good career in genre pictures--The Legend of Hell House and The Innocents are on her resume. William Dix, on the other hand, did only a couple more films (including one minor role decades later), which is a damn shame, because the kid was a natural.

When it comes down to it, The Nanny fails for the most part not because it doesn’t have the crazy of the earlier films of the genre or because Bette Davis is at best the third-most interesting person on the screen. No, The Nanny fails because it cheats the ending. In this potential accumulation of psychopathy, it gives us something akin to a happy ending that it absolutely doesn’t deserve.

Allow me to explain—the issue here isn’t that the ending is happy, but how we get to that happy ending. There are a lot of ways this could have gone to give us the ending that we (and the movie) want to give us. Instead, we get there by what can only be considered a cheat. We deserve better from our psycho-biddies than this sort of deus ex machina to allow everything to come out right.

Why to watch The Nanny: Bette Davis didn’t make a lot of bad movies.
Why not to watch: Boy does that ending not fit with what has been built up for us.