Not Another Anthology Movie 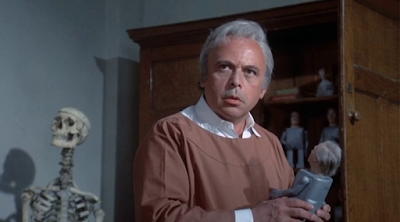 When I tell you that I watched an anthology film, you almost certainly think immediately that it was a horror film. Horror anthologies do seem to be the most popular of the style, perhaps because horror movies often work very well without a lot of characterization or without a great deal of plot. I might argue that a film like Short Cuts is a kind of dramatic anthology, but it’s not one that is more or less pure—specific stories placed end-to-end in a linear fashion. A lot of anthologies don’t really measure up against longer films. Asylum is an exception to that.

Asylum comes with a pretty good pedigree. The stories were penned by Robert Bloch, who also wrote Psycho. The cast list includes Peter Cushing, Herbert Lom, Charlotte Rampling, Patrick McGee, and Britt Ekland. Admittedly, Cushing isn’t a shock since he made most of his career in this kind of film, but the others add some real heft for 1972.

Our framing story concerns Dr. Martin (Robert Powell) heading to an asylum for a potential position. He expects to meet Dr. B. Starr, but instead is introduced to Dr. Rutherford (Patrick McGee). He learns that Starr is now a resident of the asylum. Martin will be allowed to interview four patients. If he can successfully identify Dr. Starr, who has had a full fugue-like break with reality, the job is his. Martin meets Max (Geoffrey Bayldon) the orderly and the anthology begins.

Our first story concerns Bonnie (Barbara Parkins), who we learn was having an affair with Walter (Richard Todd). Walter is ready to get rid of his wealthy wife on whose income he lives. He ultimately decides to do this with an axe, dismembering her, wrapping her like collection of choice meats in brown paper, and putting her in the freezer. But, there is some suspicion that she may not be as dead as suspected.

Next we meet Bruno (Barry Morse), who claims to have been a tailor. One day, on the verge of being evicted, a man named Smith (Peter Cushing) arrives with the need for a suit to be made from a specific fabric and in very particular ways. The question is why he really wants the suit made, and what will happen when the suit is put on.

Our third story comes from Barbara (Charlotte Rampling), who claims she is completely sane and needs to get out of the asylum to warn people. We learn that she has been institutionalized in the past, but she blames all of her issues on Lucy (Britt Ekland), her friend who seems to arrive when no one else is about.

Finally, we get a fourth story involving Dr. Byron (Herbert Lom), who makes little automatons and claims that he can put his life force into one and control it—and that the interior of the little creature is physically perfect—the automaton, when he uses it, is truly alive. This story is surprisingly short, and blends into the close of the framing story.

I enjoyed this quite a bit. Asylum has all of the problems that a typical anthology film does. The stories, while entertaining, are very short. The whole film—framing story and four shorts—is just under 90 minutes long, so each story runs slightly less than 20 minutes. While it’s enough to give us the story in question, it’s not enough to really dive into the stories being presented. In the film’s defense, most of these are basically short stories anyway and don’t have the narrative heft for a complete movie in and of itself. The third story, with a lot more detail, might be something that could be pushed out into feature length, but the others would never make it.

That’s really my main complaint. The stories themselves are pretty good. There’s no gore here, but some decent horror moments, even if the stories themselves aren’t that difficult to see where they are going. Once again, it’s the third story that is the easiest to jump ahead to the end on, although the first story is supposed to have a shock moment that is disturbingly easy to predict.

Regardless, this was a lot of fun. I enjoyed the four stories pretty well, and I love the casting throughout. I’m very pleased I had a chance to see this.

Why to watch Asylum: Surprise, surprise, it’s an anthology that actually works.
Why not to watch: The last story feels like short shrift.