Ten Days of Terror!: The Conjuring 2

Film: The Conjuring 2
Format: DVD from Sycamore Public Library on The New Portable. 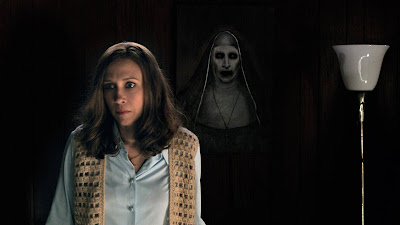 So what do I think about The Conjuring 2? Movies like this put me in a very interesting and uncomfortable position. The truth is that I liked The Conjuring well enough, and I liked The Conjuring 2 as well. These are hard movies to dislike, to be honest. I enjoy that they feel very much like slices out of the lives of the Warren family. There are things that happen in the movie that aren’t really tied to the plot in any way, but that help create the characters, or that eventually build up in to other movies. The Annabelle movies all came from a prop used in the first film, and the recent The Nun comes from something that plays a part in this one.

So, I like the world building a great deal. I like Patrick Wilson and Vera Farmiga in their respective roles as Ed and Lorraine Warren. But here’s the thing: I am of the opinion that the Warrens are very advanced grifters who pulled a series of hoaxes on the world and made their living from it. I know this is not the most popular opinion, but when I see the notation at the start of the film that this is “based on a true story,” I can’t help my eyes from rolling.

Anyway, aside from the parts of the film where the Warrens are dealing with skeptics and terrible visions of an evil nun, most of the film takes place in England. The film covers another of the Warrens’ cases, this one called the Enfield Poltergeist, known colloquially as something akin to a British Amityville. The family in this case is the Hodgsons, a single mom and four kids. Odd things start happening around the house, many of them focused on daughter Janet (Madison Wolfe). It soon becomes clear that the haunting is a man named Bill Wilkins (Bob Adrian), who died in the house previously.

Of course, all hell breaks loose. Lorraine is psychically fragile, and asks Ed to promise that they will not take any more cases. Ed agrees, of course, but then a representative of the Vatican shows up with information about the Hodgson family. The Church is asking for the Warrens to check out the situation and give their opinion on it. Lorraine is desperate that they not get too involved, and Ed promises to make that work. Much of this comes from the fact that she has been having visions of Ed’s death at the hands of a demon.

Where this goes is not going to be surprising to anyone. Of course the Warrens are going to get fully involved and of course it’s going to be a real haunting. I mean, why wouldn’t it be? Janet is going to manifest a demonic voice that will only show up at times when she could be faking it. The movie’s take on this is that the demon—the nun creature that Lorraine is having visions of—is smart enough to make it look like a hoax, so when Janet is caught on camera trashing the kitchen and claiming it was the demon, it’s just evidence of how truly terrible the creature is.

Like I said at the top, I find it difficult to not like these films. They’re well-acted, and Patrick Wilson and Vera Farmiga are both great. It’s hard to not want to see more and more Conjuring films come out as they take on different and stranger cases of demonic possession and hauntings.

But, as I also said at the top, I don’t think any of this is real. If the Warrens themselves aren’t grifters, they were people who were continually and continuously fooled by other grifters. Sure, this comes from the fact that I don’t believe in the supernatural at all.

And really, what ultimately bothers me is that there’s no need to claim these are based on real stories. The stories themselves are good and naturally compelling without building up the bullshit hype about these being real possessions. Seriously, it’s gotten so that all you have to do is chant in Latin and hold a crucifix, and suddenly you’re a real-life demon slayer. Honestly, I don’t want my fantasy movie time to be spoiled by this kind of nonsense.

Why to watch The Conjuring 2: It’s hard not to find the Ed and Lorraine Warren stories interesting.
Why not to watch: Well, the Warrens are grifters (my opinion), so there’s that.