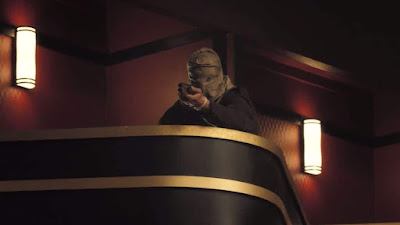 I’m not always a huge fan of films that trade on time travel. The traditional time travel film has a person or people moving backward or forward in time, having a particular adventure or adventures, and then returning home. Modern films that deal with time loops and time travel tend to be a lot more convoluted. Triangle is a case in point. The loop that we’re going to deal with here is complicated, folds in on itself, and repeats in strange ways.

I give the writer/director Christopher Smith a great deal of credit in that respect. Triangle manages to go quite a bit beyond being merely clever. It’s devious, and eventually all of the strange chicanes of the plot make a certain amount of sense. I’m not sure that absolutely everything resolves as it should, but at the very least, most of it does. And while like many films of this nature there is ultimately no explanation for what happens, there is a twisting path that does allow for a narrative of sorts, if a very odd one.

I’m not, however, going to dig too deeply into that narrative. On the one hand, to do so would cause this review to be a couple of thousand words long, and that’s a hell of a lot more than I’d prefer to write about Triangle. Second, and arguably more importantly, this is an interesting enough web of events that I don’t want to ruin it. Instead, I’m going to give the very basics to set up the story, but I’m going to leave the bulk of the time loop untouched.

Jess (Melissa George) has been invited for a day of sailing with Greg (Michael Dorman). She prepares for the day with her autistic son Tommy (Joshua McIvor), but then arrives at the harbor without him, claiming that he is in school. At the ship, she meets couple Sally (Rachael Carpani) and Downey (Henry Nixon), Sally’s friend Heather (Emma Lung), and Victor (Liam Hemsworth), a runaway teen who lives with Greg. For the first part of their sailing trip things are fine, but a sudden terrible storm sinks the boat (named Triangle and giving us the name of the film). Heather is lost and presumed drowned while the survivors sit on the upturned hull of the sailboat.

Shortly thereafter, a large ocean liner named Aeolus drifts by, and the group manages to board. Despite having seen someone on one of the decks as the ship sailed by them, the ship appears to be entirely deserted. And then things start happening that can’t be explained. There are traces of blood on the deck and writing on a mirror that tells everyone to go to the theater. And then people from the group start being attacked, and blaming Jess for attacking them.

I’m going to leave the plot there, because this is where things start getting interesting. A great deal of what makes Triangle worth seeing is exactly how the loops work on Aeolus as well as through the rest of the film. What makes Triangle work as well as it does is that the bulk of the time spent watching is spent trying to unravel not just what is happening, but why and in what order as well. The screenplay is very smart in revealing things in pieces, allowing the audience to not just make sense of what is happening on the screen, but what we already know and have seen.

For as interesting as deciphering the twisting plot is, there are two moments that are absolutely terrifying. On this rewatch, I realized that I had remembered one of these and forgotten the other. Neither of them were reduced in impact with this rewatch, though. I need to put what actually happens under a spoiler, though, because these aren’t moments to have spoiled. I do want to talk about the first one of these moments because it’s the moment when the entire film turned for me from being an interesting puzzle into being something far more devious and bleak.

Jess is told by the mysterious attacker that she needs to kill everyone if she wants to get off the ship, so she begins attacking the others. At one point, she stabs Sally, who runs away. When Jess finds the wounded Sally again, Sally is bleeding to death surrounded by multiple bodies of previous Sallys she has killed as she traverses the loop time and time again. It’s the first time that we see that this isn’t merely Jess experiencing a loop of time. Jess has been experiencing this loop time and time again. It’s a chilling moment.

I liked Triangle well enough the first time I watched it, and I liked it more this time through. It’s bleaker than I remember, and while that often works against a film in my estimation, it feels appropriate for Triangle in a lot of ways. Does everything line up? I’m not so sure, but I’d very much be willing to watch it again to find out.

Why to watch Triangle: It’s smarter than it has any right to be.
Why not to watch: It’s disturbingly bleak.