Ten Days of Terror!: Phantom of the Paradise

Films: Phantom of the Paradise
Format: Streaming video from Hulu+ on various players. 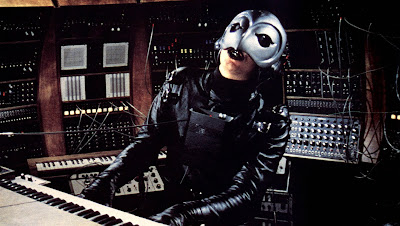 There are times when you realize just how failed we are as a species. In the 1970s, we had a choice of rock operas with which we could have become collectively obsessed as a culture. Tommy might have been the choice of pinball had become a thing, even if Quadrophenia is clearly the better Who-based choice. Had we been an even more religious society, Jesus Christ Superstar might have been the one. But for off-the-wall entertainment value, the world collectively decided to fawn over The Rocky Horror Picture Show when we could have instead been going to midnight shows of Phantom of the Paradise.

At first blush, you figure you know what is going on here. It’s clearly going to be an updated version of The Phantom of the Opera, but with different songs and a different kind of theater. Truthfully, it kind of is that, but it’s so much more. It’s as much a version of Faust as it is anything else, and there are elements of The Picture of Dorian Gray here as well. Three classic horror tales for the price of one.

Music producer Swan (Paul Williams) is renowned as a hitmaker, evidenced by the fact that he produces a nostalgia act called The Juicy Fruits (think Sha Na Na) to great acclaim. Composer Winslow Leach (William Finley) hopes to have Swan produce his cantata based on Faust. Swan hears part of it and decides it will be the perfect music to open his new club, The Paradise. He sends his assistant Philbin (George Memmoli) to steal it under the guise of producing it.

But, naturally, Swan steals the cantata. When Winslow tries to talk to him, Swan has him removed, has drugs planted on him, and has him arrested. Winslow is sentenced to life in Sing Sing, and here’s where things start to get weird. A new program created by Swan’s foundation has “volunteer” prisoners having their teeth extracted for hygienic reasons, having them substituted with metal teeth, and naturally, Winslow is “volunteered.” When he hears that The Juicy Fruits will be performing Faust, he goes crazy and breaks out of prison, breaks into Swan’s factory and tries to destroy the albums. Instead, an accident in a press scars him and destroys his voice. Winslow vanishes, presumed dead.

Meanwhile, we’re also introduced to Phoenix (Jessica Harper in her big screen debut). Phoenix is an up-and-coming singer, and someone Winslow decided when he met her would be appropriate for his material. When Winslow shows up to haunt The Paradise, stealing a black outfit and owl-like helmet to cover his face, he decides it is Phoenix who will sing his music. But, of course, Swan is ahead of the game here—he knows Winslow is alive and convinces him to rewrite his cantata for Phoenix. And so Winslow signs a contract—in blood—to do the work, and that’s not going to end well.

So here’s the thing: all of this is more or less done to give us the two great set pieces for this film. Swan decides that Phoenix is perfect and since he only likes perfection in himself, he gives the duties of Faust to a glam rocker named Beef (Gerrit Graham). Graham plays Beef as clearly 1970s homosexual except when he’s on stage. But when we actually get to the opening night of Winslow’s Faust, we get a scene that is the pinnacle of rock opera insanity. The members of The Juicy Fruits have become Beef’s new backup band, calling themselves The Undeads. Dressed in costumes and cosmetics clearly designed to evoke the Cesar character from The Cabinet of Dr. Caligari, the opening number has them ripping fake body parts out of the audience to create Beef, who then appears as a man just stitched together, Frankenstein’s monster-like. This section of the film is everything you want it to be. It’s absolutely the definition of entertainment.

The second set piece, Swan’s wedding to Phoenix, comes at the conclusion of the film, so I won’t spoil it.

There’s a great deal about Phantom of the Paradise that doesn’t make sense, or that requires wholehearted shrugging and giving up on rationality from the point of view of the audience. So much requires a willing suspension of disbelief, but the movie itself is so earnest that this isn’t a problem. I’m happy to do so to go where the movie wants to take me. I love that it combines elements of both The Phantom of the Opera and Faust, as well as it does—it’s just as fair to call this a rock version of The Phantom as it is to call it a musical Faust. I love how much this is about excess and ridiculousness.

In fact, the hardest part of this to believe is having Paul Williams as a desirable sex god at the center of it. I’m not going to bag on Williams as a talent. Say what you will about the guy, he’s written a bucketload of timeless songs—Evergreen, Rainy Days and Mondays, Old-Fashioned Love Song, We’ve Only Just Begun—not to mention the fact that he co-wrote The Rainbow Connection. I give him nothing but respect. But a sex symbol? That beggars the imagination.

Still, I don’t really care. Honestly, there’s no reason that anyone should care about or even know The Rocky Horror Picture Show when Phantom of the Paradise exists.

Why to watch Phantom of the Paradise: This is the rock opera we didn’t know we needed.
Why not to watch: Paul Williams? Really?