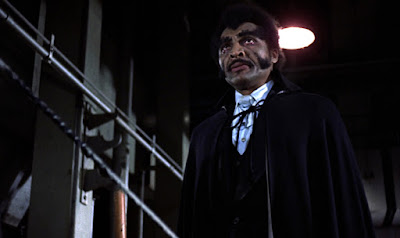 There’s something special about exploitation movies of the 1970s regardless of exploitative genre. Blaxploitation films were such a natural outgrowth of the film industry and the rising realization that there was an African-American (Afro-American at the time) audience for films that showed them as the stars. Genre films beyond the crime film, action movie, and police film were natural extensions of this. Since there is a particularly odd strain of conservativism in horror films, co-opting the genre to show Black heroes was a natural choice. Of these films, Blacula is the granddaddy for a lot of reasons.

We start with Prince Mamuwalde (William Marshall), sent by the Abani nation to seek help from Count Dracula (Charles Macauley) in suppressing the slave trade. Mamuwalde and his wife Luva (Vonetta McGee) are instead attacked by Dracula, who both thinks that the slave trade has some benefit and, of course, is a vampire. Dracula turns Mamuwalde into a vampire for his impertinence and then locks him in a coffin, sealing both him and Luva in a room—Luva to die and Mamuwalde to suffer. Dracula also dubs Mamuwalde “Blacula,” giving us our title.

A few hundred years later, the coffin containing Mamuwalde is purchased by stereotypically 1970s-gay interior decorators Bobby (Ted Harris) and Billy (Rick Metzler), who inadvertently awaken Mamuwalde, who naturally kills them both. Trying to figure out what the world has become, Mamuwalde follows Bobby’s body to a funeral home where he gets a look at some of the mourners. Chief among these Dr. Gordon Thomas (Thalmus Rasulala), his girlfriend Michelle Williams (Denise Nicholas), and Michelle’s sister Tina (Vonetta McGee). Mamuwalde is naturally immediately entranced with Tina, who is (of course) a dead ringer for his late wife Luva. And thus we have a plot.

There are a couple of people we can add to the mix. First, we need to include Lt. Peters (Gordon Pinsent), who eventually becomes the Jonathan Harker to Dr. Thomas’s Van Helsing. We also need to include Elisha Cook Jr., who plays mortuary attendant Sam (and eventually gets attacked). I also want to mention Ji-Tu Cumbuka, who plays Skillet, who I think is supposed to be comic relief, but isn’t in the movie enough to really matter.

There’s honestly a lot to unpack with Blacula, and I don’t really know where to start. The natural initial thought about it is that it’s going to be a joke of a film—a black Dracula? Really? How could it be anything other than derivative and silly? And yet here we are, provided with a film that genuinely stands on its own in the vampire mythos. It may not have the credibility of the original Universal film, but it stacks up surprisingly well against many of the Hammer films, the Frank Langella version, and even Bram Stoker’s Dracula.

A substantial amount of the credit for this goes to William Marshall, who has the sort of gravitas that isn’t often seen on the screen. Marshall has a thundering voice that sounds like James Earl Jones with an extra pair of testicles, not surprising considering the man also had a career as an opera singer. This would be far less of the film it is with someone else in this role. Marshall’s voice is a large part of his presence, but it’s not all—much like Christopher Lee in the Hammer Dracula films, Marshall can command the screen without speaking a word if he needs to.

There’s a lesson in a film like Blacula. It’s easy to toss this film aside based on the premise and the name. And yet, the script was designed to tell a real story that makes sense and isn’t just there to take up space. The “’sploitation/xploitation” suffix is one that makes a film easy to write off as trash, and it’s clearly not the case. Blacula is smart, holds together, and nearly fifty years after it was released, holds up.

I honestly didn’t know what to expect with Blacula, but I didn’t expect it to be as entertaining, as good, or as much fun as it turned out to be.

Why to watch Blacula: You think it’s going to be trash, but you’re so, so wrong.
Why not to watch: Weird facial hair?