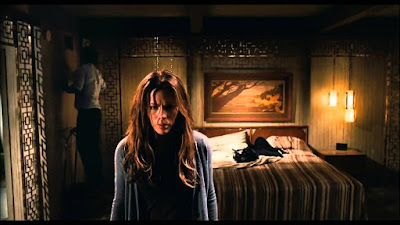 I can’t say that I was thrilled about the prospect of watching Vacancy. Once you know the elevator pitch for the film, what’s going to happen certainly follows as a guarantee. Vacancy is essentially The Strangers only in a motel instead of someone’s house. That’s it. I can imagine the pitch meeting, as can you. And you’d be wrong, as would I be. Vacancy came out the year before The Strangers, so in that respect, the pitch meeting for The Strangers would be, “Vacancy,” but with people at home.

All joking aside, this is the case here. The elevator pitch for Vacancy is that a couple in the middle of a divorce ends up at a seedy motel in the middle of nowhere. They discover soon that the motel, and their room specifically, has been used to create a series of snuff films of unwitting motel guests being brutally murdered. And, since they are the only guests at the motel, it’s their turn now.

It’s a great idea for a movie, and Vacancy holds on for as long as it can make that plot work, which is 85 minutes, including credits. That’s absolutely the right length for this film, and five minutes more would be too much. As it is, 85 minutes strains what plot there is; we could almost certainly lose 5 or 10 minutes with no loss to the story. And really, there’s not a great deal of story here. A recounting of the plot would essentially be me giving you a blow-by-blow of our couple, played by Luke Wilson and Kate Beckinsale, finding out where they really are, slowly discovering the depths of the danger they are in, and starting to fight back. Yes, the two characters have names, but it honestly doesn’t matter that much, does it?

Truthfully, none of the characters really need a name here, and most of the people in the film aren’t in it for long. Ethan Embry shows up for a couple of scenes as a mechanic who gets our couple purposefully stranded so he can help with the snuff film festivities later on. We also get Frank Whaley as the motel manager and in one of the sleaziest roles of his career.

As with most movies, there’s going to be good and bad with Vacancy. I’m honestly surprised at just how big the upside was on this movie. I figured this was going to be the cinematic equivalent of the Thomas Hobbes quote about life being “…nasty, brutish, and short.” And, surprisingly, it’s not. There’s a good bit of tension worked up here. Our two protagonists sometimes make bad choices on things, but they always make believable choices and rarely make dumb ones that are simply there to advance the plot. There’s very little gore here as well. Vacancy aims to be scarier than it is gross, and for the most part, it succeeds in this.

There’s a good bit of tension worked up in the film. Some of that comes from the direct menace of people who are going to almost certainly be attacked and murdered in their room. Some comes from the isolated location, and much from the perceived power of the attackers. After all, those attackers, over the course of the film, kill the protagonists’ car, have the ability to selectively cut power and phone service to the room, and are willing to kill a police officer to cover for their scheme. A lot comes because we assume that our couple is doomed, and they frequently do the same sort of thing that most of us would do in that situation, implying that we’d be just as doomed.

On the downside, the film desperately wants our main characters to have a backstory, and it’s unnecessary. We discover eventually that they are in the process of getting divorced and that the cause of the divorce is the death of a child. I don’t want to sound harsh, but it doesn’t matter. It doesn’t make them more likeable or more interesting. We’re already emotionally on their side. This sort of exposition is completely worthless.

I was surprised at how effective this was overall. There’s not much here and certainly not enough to watch it a second time, but it’s an effectively little thriller.

Why to watch Vacancy: It’s far more interesting than you expect it will be.
Why not to watch: What little backstory we’re given is completely unnecessary.