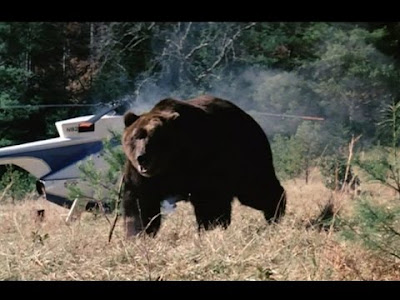 Every now and then, a movie changes the game. The Matrix affected just about everything that came after it for the next few years. Jaws had that kind of effect as well. In the years that followed its release, there were all sorts of “animal goes on a human-killing rampage” films. One of the first to attempt to capitalize on the trend was Grizzly that followed the next year. Lots of movies owe a debt to Jaws in that respect, but few are so obviously clear about their position as this one. Grizzly really wants to be a land-based Jaws and it makes no bones about it.

When I say that this wants to be a land-based Jaws, I mean that as clearly and as sincerely as I can. Grizzly has almost the same beats and pretty close to the same body count. It even goes for about the same distance into the movie before showing us the big ol’ bear who is doing the attacks. The problem is that Grizzly uses a trained bear for the animal photography and what is clearly an artificial bear paw on a stick for the attack sequences. Every character in Jaws has an analogue here, and, for the main characters, all but one suffers the same fate. Even the ending is almost identical—so much so that I’ll put it under a spoiler later.

Anyway, we have a national park that suddenly has a bear attack problem. Two young women are mauled by the bear, creating a situation for ranger Michael Kelly (Christopher George), the almost a lawman equivalent of a cop. Following a post-mortem of one of the victims, the park supervisor/equivalent of the mayor (Joe Dorsey) gets angry at Kelly, since the bears are supposed to be in the high country. Kelly contacts naturalist Arthur Scott (Richard Jaeckel), who is an expert on the area to come in and help, giving us the first of our Hooper/Quint characters. The second is our helicopter pilot Don (Andrew Prine). We’ve even got a love interest for Kelly—a photographer named Allison Corwin (Joan McCall) who, much like Chief Brody’s wife in Jaws essentially disappears for the second half of the movie.

What we’re going to get is a group of people who clearly know that a grizzly is stalking their woods hunting for that grizzly and a bunch of dumb people hanging around those campgrounds despite the danger. Part of that is because we need victims for the bear. Part of that is because this is Paws, not Jaws and our mayor equivalent is determined to keep the park open no matter what. Eventually, when the park gets closed, our trio of heroes goes out into the forest (on Quint’s boat) to hunt the bear (shark) in a battle to the death.

I honestly don’t have a great deal to say about Grizzly. There’s so little original here that it’s staggering the filmmakers weren’t sued by Peter Benchley. If one of the characters had a favored weapon called Orca, I wouldn’t have at all been surprised. For all of the similarities with the other, much better film, it’s the egregious ending that absolutely take the cake.

At the end of the movie, with our two Quint/Hooper equivalents killed (that both die is the main difference from our source material), our main cop/ranger hero Kelly goes back to the helicopter he and Don have arrived in and retrieves…wait for it…a bazooka to kill the bear. He kills the bear with a bazooka. It’s good to know that:
a) Park rangers have bazookas on their helicopters,
b) They receive training in how to use them,
c) Those bazookas evidently come pre-loaded, and d) When you blow up a bear with a bazooka, you don’t get any bear splatter on you.

Why to watch Grizzly: You just can’t get enough of really big animals killing people.
Why not to watch: It’s a cheap knockoff Jaws and it’s not pretending to be anything else.