The Greatest Music Video Ever Made 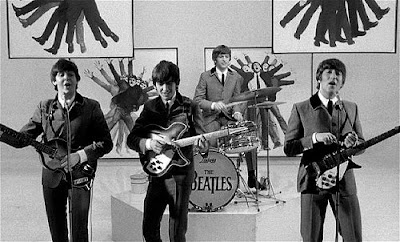 Every now and then, a movie comes along that changes the game. When everybody imitates you, you must have done something right. It’s what happened shortly after the release of The Matrix, it happened when John Carpenter made Halloween, and it happened with Richard Lester’s A Hard Day’s Night.

A Hard Day’s Night is somewhere between a movie and a documentary. While not a real day in the life of The Beatles, it certainly does touch on what at least a part of their life must have been like. Like the movies of a similar style, John, Paul, George, and Ringo play themselves as they go on a whirlwind tour of…somewhere. They spend time on a train, live in hotel rooms, get chased by cadres of girls, sing a few songs, and get into trouble.

There’s not really much of a plot beyond that with the exception of the presence of Paul’s grandfather (Wilfrid Brambell), who constantly gets into trouble. As Paul tells us early on, “He’s a king mixer,” and where grandfather goes, trouble follows.

The boys are scheduled to play a show, but the grandfather convinces Ringo that life is passing him by. Ringo buys into it and “goes parading.” He disappears before the show to live a little, and there’s panic that he won’t be back in time for the show to go on. That’s pretty much the entire movie. Otherwise, it’s simply an excuse for the members of The Beatles to act like goofs, have fun, and make fun of other people.

For being so essentially plotless, A Hard Day’s Night is still an absolute joy to watch. The bits are still funny, the songs are still great. This is not a movie I get tired of quickly simply because it is nothing more than joyous fun. It plays very much like an extended Monty Python skit, flitting from topic to topic, but always sort of being in the same general direction, or coming back to the same thing.

This isn’t what makes this film so noteworthy, though. What does is the way in which it was filmed. After A Hard Day’s Night, jump cuts became more common, as did handheld camera work. In fact, much of the style of films from the late 60s to modern television has been influenced by what Richard Lester did with this film. It could be argued pretty easily that music videos, music documentaries, the Monkees, and films like This is Spinal Tap wouldn’t exist had this film never been made.

Ultimately, A Hard Day’s Night is little more than a lark. The members of the band want nothing more than a few minutes of peace to sit around and do not much of anything, but they are constantly hounded by fans, by their managers, by reporters, and by people who want something from them. The later Beatles films like Help!, Yellow Submarine and the rest didn’t manage to capture this same joie de vivre or nearly as much of the presumed spirit of the band.

I watched this tonight with the entire family—it was Sue’s choice, which I was comfortable with, it being a couple of days past her birthday. Maxine fell asleep about half way through and Gail spent the entire film either fussing because we weren’t watching her choice or trying to make sense of what was happening. She loves Yellow Submarine, but I don’t think she’ll choose to watch this one again any time soon. Her loss.

Why to watch A Hard Day’s Night: Great music and the birth of music videos.
Why not to watch: You’re an angry pre-teen.