The Rebirth of the Western 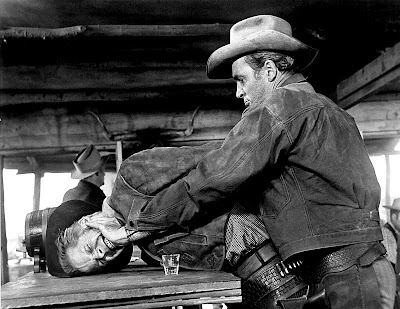 Several times in cinematic history, the western has been proclaimed dead. The same plot over and over gets tiresome, and there were a lot of westerns that recycled that some tired plot again and again. In the late 1940s, the western was dead according the Hollywood, good only for B-movies and fading stars, a few cheap thrills and a quick buck in the theater.

Fortunately for a movie-going public that had come to love the tales of the Wild West, some very smart directors and writers got it into their heads to make a different sort of western. The old school western had good guys who were all good and bad guys who were all bad. No one had conceived of a western that featured a hero who was anything other than the noblest paragon of virtue, always fightin’ fair and always coming out on top with nary a scratch on him, no matter what the bad guys did.

It wouldn’t be too much of a stretch to say that Anthony Mann's Winchester ’73 led to something of a revival of the western, and most of that in the character of Lin McAdam (James Stewart). The film follows not the man himself but the gun of the title, and Winchester 1873 model known as a One-in-a-Thousand. This gun was rare, a fortuitous fluke of the production line. Essentially, it was a gun so good that it was nearly flawless; fewer than 150 of them came off the line no matter how many Winchesters were made.

The gun is offered as a prize in a shooting contest in Dodge City, and McAdam shows up with his riding partner High Spade Frankie Wilson (Millard Mitchell). The gun is a rich prize, but the real quarry is a man named Dutch Henry Brown (Stephen McNally). Brown killed McAdam’s father, and McAdam is after him to bring him to justice, preferably at the business end of a Winchester.

In Dodge, everyone has to give up his gun by order of the sheriff, Wyatt Earp (Will Geer). It’s also here that Lin first encounters the film’s femme fatale, Lola Manners (Shelley Winters). She’s on her way out of town, by order of Earp. At the shooting contest, it comes down to McAdam and Brown, who battle it out. McAdam wins with a bit of fancy shooting, but Brown and his gang steal the gun and ride off.

From there, the gun changes hands multiple times: to Indian trader, to chief, to rancher, to criminal. That criminal, Waco Johnnie Dean (Dan Duryea) is waiting on Dutch Henry to pull off a dramatic crime. McAdam and High Spade finally catch up to Dean, Brown, and the gun, and everything comes to a head for the final showdown. The chief isn’t to be missed; it’s Rock Hudson under a lot of makeup.

So what makes it different? Essentially, the biggest difference is that Lin McAdam isn’t a Boy Scout. At several times in the film, he seems very much on the edge of losing control of himself, something that audiences hadn’t seen in the hero of a western film before, and hadn’t seen much from Jimmy Stewart, either. While essentially a heroic character, he is not in control of himself, a significant break from the typical western. It also comes out in the course of the film that McAdam fought for the South in the Civil War, a fact that for many audiences may change the opinion of the man.

This film almost certainly ushered in a new era for Stewart. People were certainly used to seeing him be passionate on the screen; there’s no shortage of emotion in films like Mr. Smith Goes to Washington and It’s a Wonderful Life, but here he is a man truly on the edge of losing himself, and that’s something new for him. Following this film, Stewart went on to take on a number of challenging and nuanced roles. 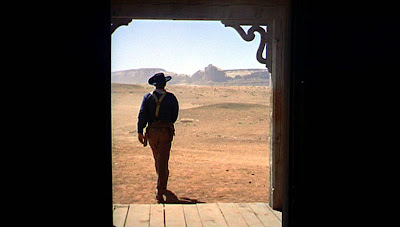 It also wouldn’t be much of a stretch to suggest that without Winchester ’73, The Searchers may not have been made, or may not have been made in the same way. The Searchers could be the greatest film of John Wayne’s career. It was unquestionably one of his favorite films, considering the fact that his son, Ethan, was named after Wayne’s character, Ethan Edwards. The simple story is helped immeasurably under the direction of the great John Ford, a veteran of the western genre.

In The Searchers, Ethan Edwards (Wayne) returns home from the Civil War to his brother’s ranch in Texas. Shortly after his arrival, the ranch is raided by the Comanche, who kill most of the Edwards clan, but run off with the two daughters, Lucy and Debbie (Natalie Wood). Ethan sets off in pursuit, accompanied by Martin Pawley (Jeffrey Hunter), the 1/8 Comanche adopted son of Ethan’s brother. The two men pursue the girls and the Comanche tribe for five years, dealing with privation. For Martin, the biggest problem is living without Laurie Jorgenson (Vera Miles), the woman he loves.

Like Lin McAdam, Ethan Edwards is a seriously flawed character. Ethan’s issue is rampant racism against the Comanche in general, and the tribe of Scar (Henry Brandon) in particular. Ethan, in fact, is so overtly racist against the Comanche that he can barely stand to be around Martin most of the time. After a few years of the search, the question becomes not whether or not Ethan and Martin will find Debbie, but whether or not Ethan will kill her when he finds her because she has become assimilated into the tribe.

A few of the more interesting performances come from minor players. One, Charlie McCorry (Ken Curtis), is played as the foil to Martin for the affections of Laurie. McCorry is oddly comic and evidently slow, but has the advantage of being home and available, unlike Martin. Another comic performance comes in the character of Mose Harper (Hank Worden), who is sort of a court jester to the deadly seriousness and earnestness of Ethan.

The most telling shot of The Searchers is the final shot when Ethan brings Debbie back home to the family farm. Martin and Laurie enter the house happily, finally together with the remnants of Martin’s family while Ethan stands outside and turns away as the door closes behind him. Ethan, while certainly a member of the family, is forever on the outside looking in. Whether this is due to his intense racism and the fact that he nearly killed Debbie twice or something else isn’t known, and really isn’t important.

However, his hatred of the Comanche is understandable. Lucy is killed almost immediately by the Comanche after being ravaged by them, and Ethan’s family is destroyed as well. It’s evident from the start of the film that Ethan has feelings for his brother’s wife, and she is brutally killed. Additionally, in an almost throwaway, a gravestone by the family homestead indicates that his mother was killed by the Comanche as well.

Ethan’s racism, while always evident, comes to the fore when he encounters a group of soldiers who raided the Comanche and came away with a few white captives. These women are clearly insane, at least by the standards of the white men, particularly the two young girls who do little but grin maniacally at Ethan while he attempts to determine if one of them might be Debbie. Hard to say if the film is suggesting their time among the natives drove them crazy, or if there was some other cause. It might be argued that the women are shell-shocked after a fashion, but in Ethan’s world, they have ceased being white, and are now nothing more than, as he says, “Comanch.”

Can it be argued that the western became what it did by the influence of these films? I think so. Films like Unforgiven might have never come about without the idea of an imperfect, flawed western hero who was still worth rooting for. Both films are excellent, and both are still worth watching, even for those who aren’t fans of the genre.

Why to watch Winchester ‘73: It was the original gritty reboot for an entire genre.
Why not to watch: It’s not that gritty by today’s standards.

Why to watch The Searchers: Proof that The Duke could act and a plot that still resonates.
Why not to watch: In your world, John Wayne only played John Wayne.
Posted by SJHoneywell at 11:18 PM